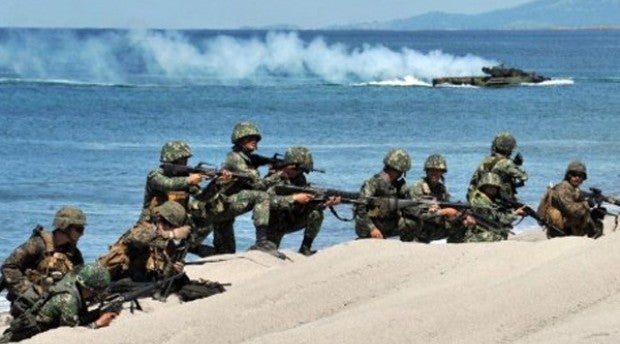 US and Philippine Marines simulate an amphibious landing as part of RP-US Amphibious Landing Exercise on a beach in the Philippines. AFP FILE PHOTO

The temporary deployment of US forces in Zamboanga City to help the Philippines fight terrorism is now in its 12th year.

A top military official in Zamboanga City has confirmed that American soldiers remained in the city, Basilan and other parts of western Mindanao.

The deployment started in 2002, with the US military shuffling the members of its contingent here to prolong its presence, the official said.

“They remain to provide technical support and training such as in the use of firearms and other techniques,” Guerrero said.

The government buys firearms from the United States but Filipino troops need training in handling those weapons, he said.

“They have the expertise and we learn from them,” Guerrero said.

The Inquirer recently saw two American soldiers aboard a vessel—apparently coming from patrolling the seas off Tabiawan in Isabela town, Basilan province.

“And they conduct humanitarian missions. They have been doing great things,” he added.

Guerrero said even if it was taking the US military longer to leave, “they are here not for permanent basing. It’s a temporary presence.”

As to how long the temporary presence would last, Guerrero appeared to be uncertain.

“Personally, I am against the permanent basing (of American soldiers) here,” he said.

Guerrero would not say how many US forces were here and in nearby areas but he said their conduct was strictly monitored and regulated.

“So far, there had been no violation of any kind. The policy is very strict. Any violator will immediately be relieved,” he said.

A military official in Basilan, who asked not to be named, said the presence of US forces there was quite a headache, as some of them had relationships with local women.

“When we call their attention to it, they would say they were just establishing better civil-military relations,” the official said.

Given that reason, the Philippine military would not press the issue, he said.

“We don’t want them to have this perception that we have malicious ideas about them,” the official said.

PH wants to use more US military assets

Mindanao nun tags US military use of drones ‘killer program’