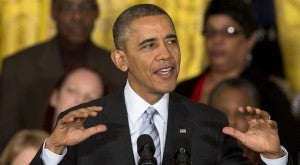 WASHINGTON — President Barack Obama will seek to ease questions over the staying power of his strategic shift to increasingly tense East Asia in April with stops in Japan, Malaysia, the Philippines and South Korea.

Obama’s visits to Manila and Kuala Lumpur are intended to make up for his no-show when he cancelled a previous Asia tour in October amid domestic political strife in Washington.

A subtext to his visit will be rising territorial tensions between several US allies and China, which deepened over Beijing’s recent declaration of an “air defense identification zone” in the East China Sea.

Beijing was also angered last week when Washington stiffened its line on territorial disputes in the South China Sea, calling for it to adjust or clarify its claims.

Obama’s stops in Japan and South Korea will also bolster close US alliances, at a time of aggravated political tensions between its two Northeast Asian friends.

It was an open secret that Obama would call in Japan in April, to take up an invitation from Prime Minister Shinzo Abe, who took office in December 2012.

But the decision to add South Korea to the trip came after rising pressure from Seoul and from the Asia policy community in Washington.

The move also reflects a desire to signal to North Korean leader Kim Jong-Un that there are no gaps in US and South Korean resolve to counter Pyongyang’s nuclear program and belligerent rhetoric.

It also indicates that Obama is keen to avoid dealing a political slight to South Korean President Park Geun-Hye that could result from a presidential visit to Tokyo and not one to Seoul.

Relations between the two nations were severely rattled by Abe’s December visit to the Yasukuni Shrine, which honors war criminals among Japan’s war dead.

Obama’s Asia itinerary also includes one noticeable exception — a stop in China. But he is expected to return to the region later in the year for regional summits in Australia, Beijing and Myanmar.

The White House said in a statement that Obama’s April trip will highlight his “ongoing commitment to increase US diplomatic, economic and security engagement with countries in the Asia-Pacific region.”

He is certain to try to push negotiations on a vast Trans-Pacific Partnership free trade pact that would include 12 nations, and is seen by some observers as an attempt to meet the economic challenge of a rising China.

The president however may encounter some skepticism from regional partners because Senate Democratic Majority Leader Harry Reid, a key Obama ally, has expressed skepticism about granting him expanded powers to negotiate trade deals.

In light of Reid’s remarks, Pacific Rim nations may be loath to make concessions in the trade talks, fearing that any deal agreed may be modified by the US Congress.

Obama will stop first in Japan where he will meet Abe. Then he will travel to Seoul for talks with Park, likely to be dominated by North Korea’s latest maneuvering on the divided peninsula.

Pyongyang is currently fuming at the prospect of annual US-South Korean military exercises starting later this month and that it views as an act of war.

From Seoul, Obama will head to Malaysia to meet Prime Minister Najib Razak to discuss deepening defense and military ties.

Obama’s final stop will be Manila, where he will meet President Benigno Aquino III and discuss evolving military relations designed to include rotations of US troops in the country.

The White House did not give exact dates for the trip, other than saying it would take place in late April.

Obama has declared he is America’s first “Pacific President” and announced a rebalancing of military and strategic resources to the dynamic, fast-growing region.

But the cancellation of his trip last year, and the departure from his administration of big political hitters committed to the Asia pivot like former secretaries of state and defense Hillary Clinton and Robert Gates, have prompted some concern in the region over US staying power.

Obama cancels trip to PH because of shutdown