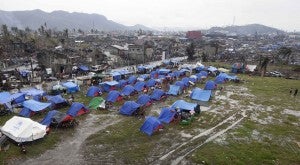 MANILA, Philippines—For one UN official winding up his emergency tour of duty in the Super Typhoon Yolanda-devastated regions, what is especially striking about the typhoon survivors is how profuse they are to thank everyone who came to help.

“I think the gratitude of the people impressed me because often, when we work in other countries, people either complain or they don’t say anything. Here, the people were very grateful and wonderful, and [that] made it an even more rewarding experience for us,” said Roberto Mignone, the Country Representative of the UN High Commissioner for Refugees (UNHCR) in Costa Rica who was sent here on a three-month emergency mission.

Mignone said it is “heartbreaking” to leave a country that he has fallen in love with.

Mignone, whose agency co-leads the protection cluster in the Yolanda-hit areas with the Department of Social Welfare and Development (DSWD), is wrapping up his tour of duty in the Philippines this week with a final trip to the UNHCR’s six field offices in Guiuan, Samar, and the cities of Tacloban, Ormoc, Cebu, Roxas and Borongan.

“That will be my final tour because then I will have to go back to my regular job in Costa Rica. I am part of the UNHCR emergency team, but I fell in love with this country and the wonderful people,” said the UNHCR official who looks after refugees fleeing into Costa Rica to escape atrocities in Colombia.

“It’ll be heartbreaking to leave but I hope that you will recover from this disaster,” he said in a phone interview.

Mignone said he was able to apply his experience in Colombia during his time here and that he is keen to share with other countries new lessons from working in the disaster zone here.

During his mission here, Mignone led the UNHCR’s protection cluster in reestablishing a security structure for typhoon survivors who, in the early part of the emergency, had been exposed both to the elements and to the risks of human trafficking and even physical harm while living in unlit makeshift homes.

The vulnerability of typhoon survivors to human trafficking has been a major concern among humanitarian workers in the disaster zone, citing how such incidents have occurred in other disaster zones.

One key measure implemented by the protection cluster is the deployment of at least 38 female police officers in exit points, evacuation centers and police desks specializing in concerns of women and children in Tacloban City and Guiuan, Mignone said.

According to Mignone, having female police officers can help in reducing the risk of human trafficking, noting how police presence in the disaster zone has served as a “filter” of those who might try to traffic survivors out of the devastated areas.