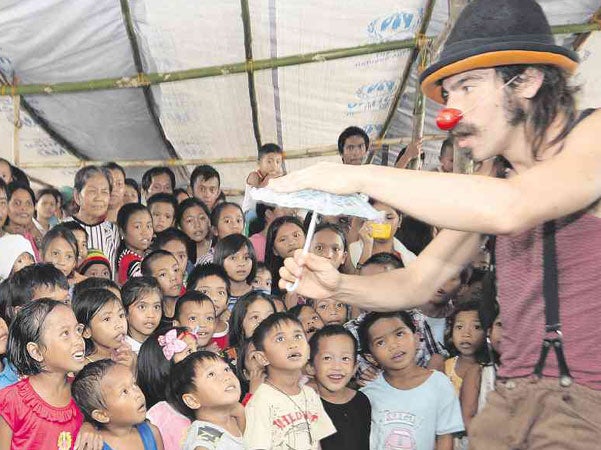 HOLIDAY MAGIC A member of Clowns Without Borders performs in front of young survivors of Supertyphoon “Yolanda” at a tent city in Tacloban City. AFP

As the Philippines girds for long-term reconstruction of typhoon-hit Eastern Visayas, foreign partners are staying by its side.

The United Kingdom and Canada have reaffirmed support for the government and typhoon survivors, announcing over the holidays fresh funding to restore infrastructure and social services in villages ravaged by the Nov. 8 disaster.

On Christmas Eve, the United Kingdom announced a fresh allocation of at least P1 billion more to support government’s “build back better” program, the British Embassy in Manila has said.

Justine Greening, the UK’s International Development Secretary, announced the fresh funding commitment on Christmas Eve, saying the amount will also send UK experts to the country to assist in the long-term recovery effort.

“The UK was at the forefront of the international emergency response in the Philippines, getting vital humanitarian aid to hundreds of thousands of survivors. Now, British money and expertise will help rebuild homes, get people back into work and protect the most vulnerable, especially girls and women,” Greening said in a statement sent out by the Embassy.

British Ambassador to the Philippines Asif Ahmad also reaffirmed the UK’s commitment, saying their “hearts and minds are with Pinoys as they rise again from this tragedy.”

The new funding pledge raises to at least P5.4 billion the UK’s total assistance to survivors of Supertyphoon “Yolanda” and is expected to benefit at least a million of the affected residents.