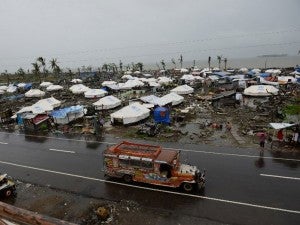 Tents are erected as temporary shelters for residents whose houses were flattened by Super Typhoon Yolanda in Tacloban City in this Dec. 25, 2013, photo. AFP PHOTO/TED ALJIBE

MANILA, Philippines—Catholic Church officials from the United States are expected to arrive in the country this week to visit areas devastated by Super Typhoon “Yolanda” (international name Haiyan).

Louisville Archbishop Joseph Kurtz, president of the US Conference of Catholic Bishops (USCCB), will lead the delegation composed of officials of the Catholic Relief Service (CRS).

They will visit Tacloban City and other areas to check on damaged churches and meet with survivors. They also plan to observe the CRS’ emergency response programs firsthand.

Kurtz, in a CBCP statement, said the devastation left by Yolanda overwhelmed people.

“That’s why on the eve of the Super Bowl, I’m packing sneakers to join a delegation with CRS to meet with Filipino church leaders and people from Samar and Leyte,” he said.

Kurtz said he will visit Palo in Leyte and “walk through rubble to let people know that the Catholic Church in the United States cares and will help.”

The bishop noted that Filipinos make up the second largest Asian-American community in the US, with more than 4 million living in their country.

“Of all who can help, Americans stand first in line. We understand solidarity. We’re can-do people who walk with people in need. That is part of the message I hope to deliver on Super Bowl Sunday when I land in the Philippines,” Kurtz said.

The CRS said that it has now shifted to long-term recovery and stability programs and will be able to assist half a million people by providing shelter, supplies, water, sanitation and livelihood.

CBCP sending copies of the Bible, rosaries to ‘Yolanda’ survivors