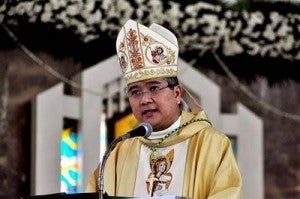 MANILA, Philippines — The predominantly-Catholic Philippines has felt the “ripple effect” of Pope Francis who recently made the cover of an iconic rock magazine Rolling Stone.

The Argentinian-born pope was the recent cover of the Rolling Stone Magazine, which usually features icons of American pop culture.

The “rock star” pontiff as described in the social media in the Philippines was hailed for simple lifestyle and his opinions on homosexuality and real world economic issues in contrast to his predecessor Pope Benedict XVI.

But Villegas, who had recently assumed the leadership of the 120-strong collegial body of bishops just last month, criticized the magazine saying it could not be treated as responsible journalism.

“It praises Pope Francis at the expense of Pope Benedict. We should not bring down one to glorify another,” Villegas said. 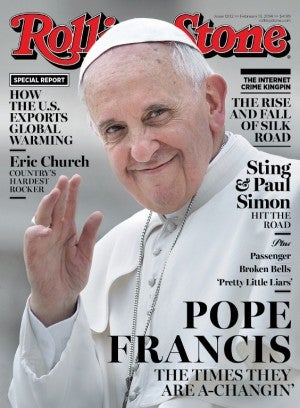 This image obtained January 29, 2014 courtesy of Wenner Media LLC, shows the February 13, 2014 cover of Rolling Stone magazine. Pope Francis is taking his place alongside the icons of American popular culture by appearing on the cover of Rolling Stone magazine, which hits newsstands January 31, 2014. It’s the first time the staunchly liberal rock-music bible has featured a Roman Catholic pontiff on its cover, which is typically graced by pop stars and movie idols.”Pope Francis: the times they are a-changin’,” reads the cover headline that borrows the title of Bob Dylan’s classic early 1960s anthem.The Argentine-born pope, who took office in March last year, has previously been Time magazine’s Person of the Year. He also made the cover of The Advocate, the respected US gay rights magazine. AFP PHOTO / WENNER MEDIA LLC / HANDOU

But still Catholic officials admitted that, the pope made an impact in the prelates and the laity in the Philippines.

In a separate interview, Archbishop Emeritus Oscar Cruz said even the prelates were struck by Pope Francis’ “simplicity.”

“I listen to him speak at tinatamaan din ako. (and I am struck). I decided to give away some of my shoes, some of the things I don’t need. A lot of priests and bishops would also say that,” Cruz, who has been vocal about his opinions in politics, said in a phone interview.

He described the pope as a “cowboy” who has been brave to institute changes in the Vatican. One of his moves is his decision to limit the honor of “monsignor” among diocesan priests to those at least 65 years old, which others see as the Pope’s tack in reducing careerism and elitism among priests.

In a recent pastoral letter, the CBCP slammed the “economy of exclusion” in the Philippines, calling the perennial poverty “scandalous.”

On the increased church attendance, Villegas noted that the Church, aside from wanting to see more people joining the holy Masses, would like people to improve the quality of their faith and spiritual life.

“The bigger question is ‘Are people growing closer to God?’ We have more people joining processions and falling in line for communion but ‘Are they becoming, living, loving like Jesus?'” Villegas said.

He said the number of churchgoers could only give an illusion of an active Church.

“But the real focus must be an individual personal intimacy with God. The verifiable indicators of a revitalized Church will be honest governance, citizenship with integrity, care for environment and business for common good not just for the capitalist,” he said.

Read Next
US Church officials to visit Tacloban City
EDITORS' PICK
Smart, MPTC introduce PH’s first toll top-up via mobile load
BREAKING: COVID-19 variant from India now in the Philippines — DOH
Get a chance to win 5G smartphones with Smart Signature Plans
PLDT Inc. Notice of Annual Meeting of Stockholders’ 2/2
Palace: New quarantine classifications may be announced Friday
Duterte declares state of calamity due to African swine fever
MOST READ
Duterte declares May 13 a holiday for Eid’l Fitr
Metro Manila, adjacent provinces to get bulk of AstraZeneca supply
Duterte: Jet ski promise just a campaign joke, stupid
Duterte defends backing out of debate with Carpio: ‘I’m not afraid of you’
Don't miss out on the latest news and information.