Grant of TPS depends on letters to Kerry 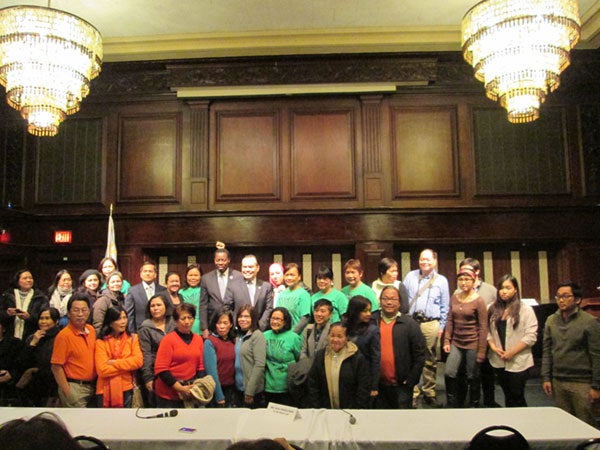 NEW YORK—Getting Temporary Protected Status (TPS) granted for the Philippines now depends on a letter-writing campaign addressed to the US Secretary of State John Kerry or his assistant, Anne Richard, supporters concluded during a two-hour long panel discussion on Jan. 28 at the Philippine Consulate.

The Filipino American Legal Defense & Education Fund, Inc. (Faldef) is encouraging people to ask as many prominent individuals and organizations to sign letters that will be sent to the Secretary of State’s office.

Consul General Mariano de Leon and City Council member Dr. Eugene Matthieu called on Filipinos to work together and spread the word through Filipino-friendly messages about the need for TPS.

City Council member Dr. Eugene Matthieu said the larger public must also informed: “You need to create momentum and get the attention of mainstream media.”

The Department of Homeland Security is still reviewing the request and monitoring the situation in the Philippines. A decision could be made by Feb. 7 this year, advocates said.

Temporary Protected Status or TPS is a humanitarian form of relief for those who are in the United States and have ongoing conflict or an environmental disaster in their country of origin. If granted, it would stop deportations and provide employment authorization documents for Filipinos in the United States, giving them an opportunity to contribute to the rebuilding efforts in Central Visayas and other areas ravaged by Typhoon Haiyan on Nov. 8 last year.

De Leon explained the economic and emotional toll wrought by typhoon Haiyan and that it will take many years to recover.

“$8.2 billion is needed to reconstruct and rebuild (affected areas), but the Philippine government only has $2 billion dollars,” De Leon explained. “The Philippines will need all the help it can get, especially from Filipinos in the U.S. and the world.” The cost of damage is pegged at $12.9 billion with 6 million Filipinos affected and 1 million homes destroyed.

The economic toll has worn down Rosalina Cielo, a middle-aged domestic helper who has been in the States for 17 years. She said she lost her home, properties and million-peso savings in the typhoon. Cielo sends money to her seven siblings back home, but she broke down in tears, saying she will need to start all over again. “It will be harder because of my age.”

Another domestic helper also broke down in tears, saying how much she is looking forward to getting the TPS approved, so she can see the family she has not seen in nearly 20 years.

Matthieu came to pledge his support for the Philippine government’s request for TPS. Matthieu appealed and was granted TPS for Haiti after the devastating earthquake there in 2010. “I am grateful for making me a part of this appeal for TPS for the Philippines,” he said.

“All of us are immigrants,” Matthieu said. “We need to stick together. It’s not the first time the Consul General and I have met. We are working together on this (TPS), because I know it’s going to take a long time for the Philippines to recover from this (disaster).”

Matthieu is confident the Philippines will be granted TPS, urging Filipinos to “take advantage of this opportunity.” He said he has talked to Senator Charles Schumer about TPS for the Philippines. 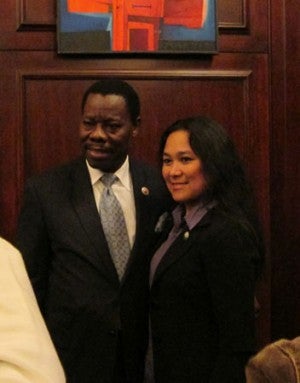 Asked why it’s taking this long for TPS for the Philippines to be granted, Matthieu said that in the case of Haiti, his request for TPS started before the earthquake, citing the many problems already besetting his home country. “It was a war zone.” He also attributed the delay to the political gridlock in Washington.

The TPS for the Philippines was requested by President Benigno Aquino III in Dec. last year in response to a letter written by Filipino-American group Migrant Heritage Commission to the Obama Administration.

De Leon and Matthieu were joined in the panel by lawyers Patricia Astorga, JT Mallonga and Licelle Kubrador from the Filipino American Legal Defense Fund, as well as reactors Buddy Deauna and Gwen De Vera of NaFAA Region 1, Rosalina Cielo of Damayan, Ferdinand Suba, Knights of Rizal as well as by media representatives Noel Pangilinan and Momar Visaya, both from the Filipino American Press Club, the talk’s host and organizer.

Mallonga said, “We (Filipinos) are here (in the States), because we are the primary breadwinners,” explaining how it’s important for many Filipinos to stay here and send money for the Philippines to recover faster from the devastation.

“We need to be more unified on this issue,” said Kubrador of Faldef.

There are 3.2 million Filipinos in the United States with 300,000 estimated undocumented Filipinos.

The public forum was hosted and organized by the Filipino American Press Club. Attendees came from various Filipino cause-oriented groups like Damayan and NaFFAA (National Federation of Filipino American Associations) as well as young Filipino-American students at Columbia University.

Other public forums are planned. The next TPS forum is set on February 1, 1 pm to 4 pm at San Damiano of the Church of St. Francis of Assisi at 31st Street in Manhattan with Fr. Julian Jagudilla leading the talk.

To find out more about letter-writing campaign, visit faldef.blogspot.com. For more information on TPS, go to http://www.uscis.gov and search for “tps.”

Aquino request to Obama for TPS for US Filipinos urgent