POEA bans deployment of workers to parts of Thailand 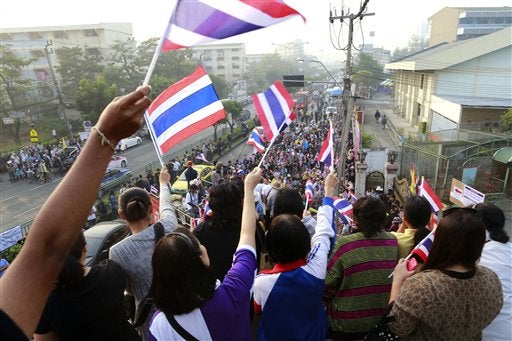 Anti-government protesters make their way on a street during a rally opposing an advance voting, in Bangkok, Thailand ,Sunday, Jan. 26, 2014. AP FILE PHOTO

MANILA, Philippines—The Philippine Overseas Employment Administration imposed a ban Monday on the deployment of newly hired Filipino workers to three places in Thailand in light of the declaration of a state of emergency in Bangkok and surrounding areas.

Thai capital Bangkok has been reeling from protests calling for the resignation of Prime Minister Yingluck Shinawatra.

“The POEA Board, in a meeting after consultation with the Department of Foreign Affairs, has approved a resolution to this effect,” Labor Secretary Rosalinda Dimapilis-Baldoz, chair of the POEA governing board, said at a news release.

Baldoz said R.A. 10022, which amended RA 8042 or the Migrant Workers and Overseas Filipinos Act of 1995, authorizes the POEA board, after consultation with the Department of Foreign Affairs, to impose a ban on the deployment of Filipino migrant workers in pursuit of national interest or when public welfare so requires.

On January 23, 2014, the DFA raised Crisis Alert Level 2 (restriction phase) in Bangkok, Nonthaburi Province; Lad Lum Kaew District (Pathumthani Province); and Bang Phli District (Samutprakan Province), in light of the declaration of a 60-day state of emergency due to the escalating civil unrest and insecurity in the said areas.

“In view of this, the Governing Board decided to impose a temporary suspension on the processing and deployment of newly hired OFWs bound for these areas in the Kingdom of Thailand,” Baldoz said.

“We strongly advise our OFWs in Thailand to be vigilant and avoid going out as much as possible, especially if they have nothing important to do outside. They should also stay alert and monitor the events in those areas,” Baldoz said.

She told the overseas workers that if they feel  their security and safety is compromised, they should try to reach the Philippine Embassy in Thailand.

Baldoz said that the Philippine Embassy in Thailand was closely monitoring developments in the Thai capital.