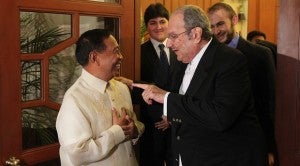 Vice President Binay has met with Saudi Prince Talal bin Abdulaziz Al Saud in a courtesy call in the Coconut Palace Wednesday. Among the topics discussed were the case of jailed OFW Joselito Zapanta who is in death row in Saudi Arabia. PHOTO/OFFICE OF THE VICE PRESIDENT

MANILA, Philippines – Vice President Jejomar Binay has gained new optimism for the case of overseas Filipino worker (OFW) Joselito Zapanta in death row in Saudi Arabia after a discussion with a visiting Saudi Prince where Zapanta’s case was among the issues discussed.

“Now that I talked with Prince Talal bin Abdulaziz Al Saud, I became optimistic,” Binay said in an ambush interview with reporters Wednesday in the Coconut Palace.

“I [was previously] pessimistic because of the hard position of the family of the victim,” he said.

Zapanta was put in death row in 2009 after he allegedly killed his landlord, a Sudanese, in self-defense.

The family of the victim has been asking for 4 million Saudi Riyal (P45 million) as blood money. The deadline for the payment was in November 2013.

A pledge of a “substantial amount” from President Benigno Aquino III was previously announced by Binay but he declined to divulge the exact amount.

The Saudi Prince has asked for the details of the case, Binay said.

“[January] is coming to a close, I think he will make it through,” Binay said. Negotiations to bring down the blood money to 2 million Saudi Riyal are still ongoing with the family, he said.

He noted that Prince Talal is very kind to Filipinos and that his wife has a keen interest in Philippine History.

Prince Talal was accompanied by his family during their courtesy call to Binay who thanked the prince for donating $100,000 to survivors of typhoon Yolanda (international name Haiyan).