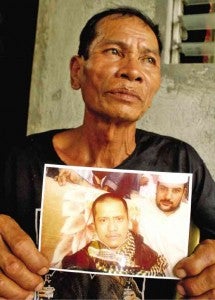 HOPE Jesus Zapanta wishes that the Saudi government would give the family more time to raise the P45-million blood money that his son Joselito must pay a Sudanese family to save him from death row. E.I. REYMOND T. OREJAS/INQUIRER CENTRAL LUZON

MANILA, Philippines—The Philippines has sought an extension to save a Filipino migrant worker facing execution in Saudi Arabia as the deadline to save his life passed, Vice President Jejomar Binay said on Sunday.

Zapanta had been given until Nov. 3 to raise $1 million to pay the family of his landlord’s Sudanese accountant whom he killed in a rental dispute in 2007.

Binay said the Philippine ambassador to Saudi Arabia, Ezzedin Tago, had also asked his Sudanese counterpart to keep up efforts to convince the family of the victim to reduce the amount of the blood money they were demanding in exchange for forgiving Zapanta.

“We are hoping that we can get another extension [from the Saudi government] and likewise [from the victim’s family] further reduction of the blood money,” Binay told reporters.

The Department of Foreign Affairs (DFA) said the government hoped the Saudi government would extend the deadline.

“We are continuing our representations with the Saudi government to help us in extending the deadline for the payment of blood money to the family of the victim of Mr. Zapanta,” Raul Hernandez, spokesman for the DFA, said.

Zapanta was sentenced to death by a Saudi court for killing his landlord’s accountant, a Sudanese national, and stealing 3,000 riyals and two mobile phones in 2007.

Zapanta claimed he killed the Sudanese in self-defense, adding that the victim beat him up after he refused to pay his rent, which was not yet due.

Binay, the presidential adviser on migrant workers’ concerns, said he wrote the Saudi king two weeks ago about the Philippine government’s request for an extension.

Binay said a date had been set for Zapanta’s execution, but he declined to divulge it.

“I do not want to say it yet because it’s too morbid for his family. As far as I can tell you he is set to be executed this month. But although there’s a date mentioned, normally that is not followed and the convict is just fetched from his cell and then executed,” Binay said.

Zapanta’s father, Jesus, said his son was originally scheduled to be executed on April 14, 2009, but the Saudi government postponed the execution after an appeal for extension from the Philippine government.

Zapanta’s family has so far raised P5.6 million, a little over a 10th  of the 4 million Saudi riyals (about P45 million) that the victim’s family had demanded.

“The amount raised is very little. But we’re hoping for a miracle just like in the case of Dondon Lanuza where the king interceded and paid more than P20 million,” Binay said, referring to the case of another Filipino murder convict recently freed after a worldwide fund-raising drive that raised only a portion of his P35-million blood money.

“The ball is in their (Saudi government) hands because they are the ones who will execute. We’re just appealing for help from the king,” he said when asked about the chances of Zapanta being given an extension.

The Saudi government has already twice extended the period for raising blood money for Zapanta’s case.

And the family of the victim has already reduced the blood money to P45 million from P55 million.

Zapanta’s parents and sister left their home in Cabetican village in Bacolor town, Pampanga province, early Sunday for a meeting with government officials in Manila on the blood money deadline.

“Our family is hoping the deadline will be extended again,” a niece of Zapanta told the Inquirer.

The neighborhood was quiet, perhaps an expression of sympathy to the family of the condemned migrant worker.

At the archdiocesan Shrine of Our Lady of Lourdes, also in Cabetican, Fr. Edgar Panlilio included Zapanta in the prayers for special intentions.

Binay also urged Filipinos to double their prayers for Zapanta and his family.—With reports from Tonette Orejas, Inquirer Central Luzon; and AFP