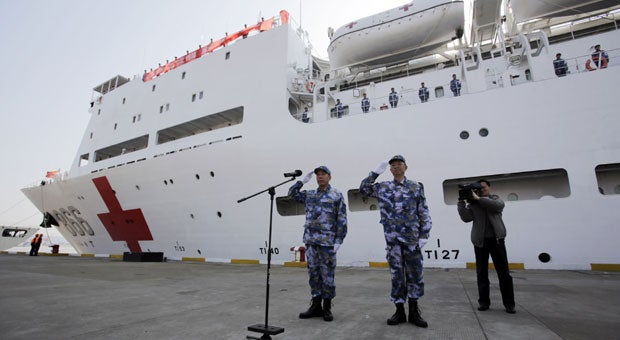 After a storm of criticism China upped its contribution to $1.8 million and dispatched its Peace Ark hospital ship (in photo), but the response paled in comparison to Japan’s $30 million, the United States’ $20 million—and even some private companies’. AP FILE PHOTO

BEIJING—Mountains of Norwegian salmon left rotting at port. A beachfront resort in Palau abandoned before completion. A sluggish response to a devastating Philippine typhoon: crossing China’s “red lines” can have painful economic consequences.

Beijing is looking to build up its political and diplomatic status as a “major responsible country” commensurate with its global economic position, and improve its cultural reach worldwide.

As well as the world’s second-largest economy, China is its biggest trading nation in goods and Africa’s biggest trading partner, a fact highlighted last week by Japan’s attempt to present itself as a competitor on the continent.

Beijing has sought to punish Norway since the 2010 Nobel Peace Prize was awarded to jailed dissident and prodemocracy activist Liu Xiaobo—despite Oslo having no control over the prize committee’s decisions.

Strict new import controls left Norwegian salmon wasting away in Chinese warehouses, and its market share in the country, once 92 percent, plummeted to 29 percent last year.

“The ‘bully boy’ tactics that China has adopted, especially with regard to small nations such as Norway … are typical of a passive-aggressive kind of personality,” Phil Mead, a British businessman who helps small Chinese companies in the European market, told Agence France-Presse (AFP).

Such behavior makes Beijing “look petty and spiteful in the eyes of the world,” Mead said in a blog post.

Norway is far from the only country subjected to China’s wrath.

Beijing is embroiled in a West Philippine Sea territorial row with Manila, and after Super Typhoon Yolanda (international name: Haiyan) struck last November—the most powerful recorded storm ever to make landfall—it initially offered the Philippines only $100,000.

After a storm of criticism China upped its contribution to $1.8 million and dispatched its Peace Ark hospital ship, but the response paled in comparison to Japan’s $30 million, the United States’ $20 million—and even some private companies’.

A year earlier, after a maritime standoff, China suddenly imposed a raft of restrictions on banana imports from the Philippines, claiming it had found pests in shipments. Tons of fruit were left to rot at Chinese and Philippine ports, with losses estimated at $23 million.

And in 2009, after the Pacific island nation of Palau announced it would accept six Uighur detainees released from America’s Guantanamo Bay military prison and considered terrorists by Beijing, construction of a Chinese-backed, 100-room beachfront resort was abruptly halted.

Experts say the “red lines” that trigger Chinese threats and retribution are limited to a tight set of very specific issues.

They include relations with the exiled Tibetan spiritual leader, the Dalai Lama; criticism of China’s leadership or human rights record; territorial disputes in the East and South China Seas; Taiwan, which Beijing considers a renegade province; and unrest in Xinjiang, the far western region home to the mostly Muslim Uighur ethnic minority.

“They have such a small, focused kind of interest, with the Dalai Lama visits in particular,” said James Reilly, professor of Northeast Asian politics at the University of Sydney, who has studied China’s unilateral sanction use. “China’s pretty unique in that regard.”

The pattern of retaliation with the Nobel laureate is so well established that in 2010, German researchers found that countries whose leaders met him saw their exports to China fall by an average 12.5 percent over the next two years, a phenomenon they dubbed “the Dalai Lama effect.”

Qu Xing, president of the China Institute of International Studies, dismissed the possibility that Beijing’s actions could damage its global image, arguing that “many people in China believe that our diplomacy could have been more assertive.”

Yet polling suggests its reputation has been hit: in a survey of 14,400 people in 14 countries, China’s own Global Times newspaper found 29 percent of respondents described the country as “belligerent” in international affairs.

Harvard University professor Joseph Nye said the problem largely stems from Beijing’s limited view of the impact its measures have on its “soft power,” a term he coined to describe the ability to achieve outcomes through attraction rather than payment or coercion.

It “does not pay enough attention” to contradictions between its aims and its actions, he told AFP. “China tends to think of soft power in cultural rather than political terms.”

China sends rescuers to Philippines after criticism over aid

Read Next
Gov’t, MILF start ‘last round’ of peace negotiations in Kuala Lumpur
EDITORS' PICK
Is your company a growth champion? Stand up and be recognized!
New Year, New Rediscoveries
More than 150 National Guard in Washington for Biden inauguration test positive for coronavirus
PNP’s Covid-19 cases jump to 9,809; 52 new infections logged
Pope Francis to miss events due to new flare up of leg pain—Vatican
Acer Philippines welcomes you to its first flagship store
MOST READ
Cavite gov’t weighs airport deal termination
Why Kris Aquino sleeps with her pearls
Parlade targets universities after fiasco with beauties
Church and bagels to go: Biden’s first White House Sunday
Don't miss out on the latest news and information.