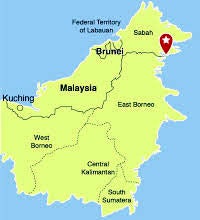 MANILA, Philippines—As the Lahad Datu standoff in Sabah neared its first year, the Sulu sultanate urged the Philippine government to pursue its claim over North Borneo.

“In the pursuit of our historic rights and legal claim, we urge the Aquino administration to support the Sultanate of Sulu in its claim over North Borneo by historic and moral obligations,” the new sultan Ismail Kiram II said in a statement.

Kiram said that the title to North Borneo or Sabah, which was transferred to Malaysia by the Bristih government, was not those of a sovereign but those of a lease.

“Owing to historic and legal facts, it is now incumbent on President Benigno Simeon Aquino III to do what he has to do if our president reckons the inhabitants of Sulu, Tawi-Tawi, Basilan, the Zamboanga peninsula and Palawan as citizens of the Republic of the Philippines,” he pointed out.

Kiram also called on Malaysia to “rectify its wrongdoings to the Filipino people in the greatest landgrabbing in human history.”

It was in January last year when forces led by Raja Muda Agbimuddin Kiram stormed Lahad Datu in Sabah to assert their claims in Sulu. The standoff went for over a month and killed about a dozen of Kiram’s followers.

The Sultanate’s secretary general Ibrahim Idjirani also made an appeal to the United Nations for a peaceful resolution to avoid bloodshed.

“We appeal to the United Nations (UN) to take the necessary preferential attention for a peaceful resolution to avoid bloodshed and likewise to the Organization of Islamic Conference (OIC) to help us in our claim,” he said.
RELATED STORIES

Another Kiram follower killed in Sabah