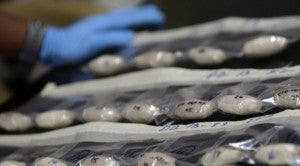 MANILA, Philippines–Three Mexican nationals believed to be members of the international drug syndicate Sinaloa drug cartel have been slapped with a criminal complaint at the Department of Justice by members of the Philippine National Police’s Anti-Illegal Drugs Special Operations Task Force (Aidsoft).

Facing complaint for violations of sections 6 and 11 of Article II of Republic Act 9165 or the Comprehensive Dangerous Drugs Act and Section 28 of RA 10591 or Illegal possession of firearms include Carlos Isaac Ochoa, alias “Ochoa”; Jaime Ibarra Sanchez, alias “Jaime”; and a certain “Fernando Jose.”

Ochoa and Sanchez are both 40 years old and from Sinaloa, Mexico.

The three are alleged cohorts of Jorge Torres, the lessee of the Leviste ranch in Batangas where about P400 million worth of shabu was confiscated.

In a 12-page referral to the DoJ, the PNP-AIDSOTF said their surveillance operations in October and November last year showed the link between the group and Horacio Hernandez, an alleged “mid-level Sinaloa drug cartel” dealer.

Hernandez, who arrived in the country on Oct. 28, 2013, was allegedly tasked to conduct illegal drug deals in the country through a joint operation with a Chinese drug ring led by Gary Tan, who was among those arrested in the raid.

He was the one who supposedly “supplied cocaine and shabu to a Manila-based drug trafficker.”

Police found out that the group was selling shabu for P1.2 million per kilogram and ephedrine for P320,000 per kilo.

It was learned that Ochoa, Sanchez and “Fernando Jose” billeted in separate rooms a hotel and suites in Greenhills, San Juan City and transferred the contrabands from one room to another. The illegal drugs they held for weeks were the same P420 million worth of shabu seized from Tan.