SC urged to act on compensation plea for Tubbataha 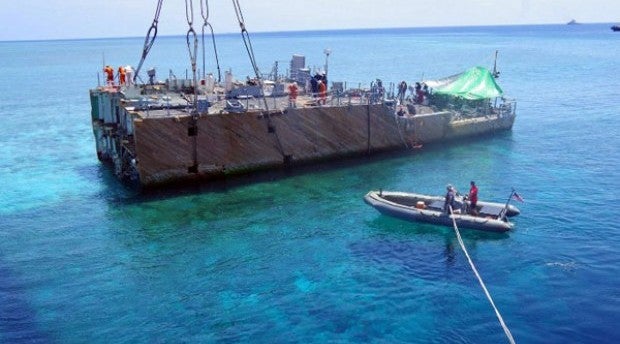 This undated handout photo released on March 30, 2013 by Philippine Coast Guard (PCG) shows the stern of the USS Guardian before being lifted by a boat crane during its salvage operation at Tubbataha reef, in Palawan island, western Philippines. AFP FILE PHOTO/PCG

MANILA, Philippines—Environmentalists, church leaders and militant groups on Thursday reiterated their call for the Supreme Court to act on their petition compelling the United States government to compensate the Philippine government for the damage caused by the grounding of minesweeper USS Guardian on the Tubbataha reef a year ago.

In their 11-page manifestation and third urgent motion, petitioners also reiterated their plea for the issuance of a temporary protection order (TEPO) enjoining the US military from conducting military exercises and port calls until clear environmental guidelines duties, and liability schemes for breaches have been put in place.

Aside from the TEPO, they also urged the high court to require US officials and their representatives to place a deposit to the Tubbataha Reefs National Park Trust Fund as a gesture towards full reparations for P58.37 million.

Petitioners said under international and domestic laws such as the Polluter Pay Principles, Rio and Stockholm Declarations, the United States government is legally bound to pay for environmental damage caused by its military forces and assets in other countries.

“The US government simply has no excuse not to immediately pay at least PHP58 million for the damages that it has incurred in Tubbataha Reef, but it still has not complied with the prescribed indemnification a year after,” Kalikasan PNE national coordinator Clemente Bautista said.

The petitioners also asked the Court to require the respondents to undertake measures to rehabilitate the areas affected by the grounding of the USS Guardian.

The Department of Foreign Affairs, Department of National Defense, and the Department of Environment and Natural Resources (DENR), according to the petitioners, should review the Visiting Forces Agreement (VFA) and the Mutual Defense Treaty (MDT) to determine whether there are provisions that ensure protection of the environment.

“The enforcement of our laws for the protection of the environment is not a subject for political bargaining and political questions. More so, if the damage to the environment is so clear and undeniable, so great in magnitude that whole ecosystems are harmed, caused by a sophisticated military minesweeper at that, any kind of solution would have to be an internationally acceptable one: restoration by the wrongdoer,” the petitioners said.

The petitioners insisted that failure on the part of the Philippine government to hold liable the US government for the damages would be construed as condonation of the act.

“If the political departments of the Republic of the Philippines will not make a redress for environmental wrongs of this magnitude, then the Philippine government, too, will be responsible to its own people,” they added.

The USS Guardian damaged 2,345 square meters of pristine coral reefs in the area which has adversely affected the ecosystem in the area as well as the livelihood of numerous small fishermen who are dependent on the reef system.

What Went Before: Damage wrought by USS Guardian