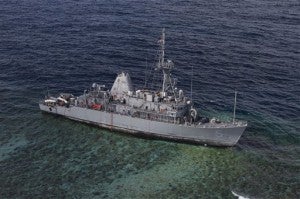 MANILA, Philippines—Lack of leadership and faulty navigational equipment led to the grounding of the former USS Guardian on the Tubbataha Reef last January, which could have been prevented, according to the official report of the United States Navy.

“The USS Guardian leadership and watch teams failed to adhere to prudent, safe, and sound navigation principles which would have alerted them to approaching dangers with sufficient time to take mitigating action,” concluded  Adm. Cecil Haney, commander of the US Pacific Fleet, in the 160-page document.

“The watch team’s observations of visual cues in the hours leading up to the grounding, combined with electronic cues and alarms, should have triggered immediate steps to resolve warnings and reconcile discrepancies,” Haney said.

The US Pacific Fleet Public Affairs Office on Friday released a press statement summarizing the US Navy’s report on the results of its investigation into the minesweeper’s grounding on Tubbataha Reef.

A link to the summary version of the report was also available online.

Haney described as a “tragic mishap” the Jan. 17 grounding of the US vessel in the World Heritage Site, which destroyed more than 2,000 square meters of prized corals that would take years to rehabilitate.

“This tragic mishap was wholly preventable and was the product of poor voyage planning, poor execution, and unfortunate circumstances. This investigation uncovers no single point of failure; instead, there were numerous links in the error chain leading up to the grounding—had any one of which been appropriately addressed, the grounding would have been prevented,”  Haney said.

The report said that “further administrative action is under consideration” against the commanding general of the ex-Guardian, Lt. Cmdr. Mark Rice, the executive officer and navigator Lt. Daniel Tyler, the assistant navigator and the officer of the deck at the time of the grounding.

The four Navy officers were relieved of their duties on April 3 by Rear Adm. Jeffrey A. Harley, commander of the Expeditionary Strike Group 7, the statement said.

The Philippine government had said the US will be fined for the damage caused by the grounding of its military ship on the reef.

The USS Guardian was a minesweeper ship that served the US Navy for 23 years.

It had just completed a port call in Subic Bay and was on its way to Indonesia and then was to proceed to Timor-Leste to participate in a training exercise when the grounding occurred, the US Pacific Fleet statement said.

The ship was eventually dismantled since this was the only way to remove it from the reef and prevent further damage to the corals.

It was decommissioned and stricken from the naval registry.

Haney, in his report, also praised the crew for its “heroic efforts to save their ship.”

He said that the actions of the engineering and damage control teams “were instrumental in reinforcing the ship’s hull integrity despite multiple breaches.”

Haney also “commended the Boat Coxswains, Damage Control Assistant, and the Navy rescue swimmers who all ensured the safe evacuation of the crew without significant injuries,” the statement said.