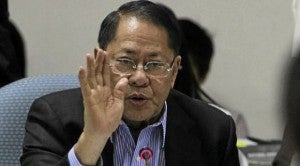 Pursuing joint fishery agreements with China is a “window of opportunity” for peacefully resolving the Philippines’ dispute with its increasingly powerful neighbor over territories in the West Philippine Sea.

This is part of the key policy recommendations and “salient, actionable proposals” that international law experts and scholars will be submitting to President Benigno Aquino III, according to former Sen. Edgardo Angara.

The experts met in Manila last month for a two-day forum and roundtable discussion on “promoting cooperation and resolving crises in Asian territorial maritime disputes.”

The experts presented a variety of approaches and ideas that could help inform the discussions on the dispute by policy makers and the public.

Exploring the possibility of joint fishing agreements could be timely amid the new fishing restrictions that China has sought to impose on disputed portions of the South China Sea, which include parts of the sea within the Philippines’ 327-kilometer exclusive economic zone (EEZ).

Beijing has authorized the maritime police of Hainan province to board and seize foreign vessels entering what it considers to be Chinese waters.

“Fish is migratory and no country can and should claim exclusive domain. Coastal countries with overlapping claims will jointly benefit through joint regulation of fishing and joint fish species management. But not through strong-arm methods unbecoming of an emerging power,” he said.

The Angara Center for Law and Economics organized the special one-day forum last Dec. 5, which was followed by a closed-door roundtable discussion the following day, “to make recommendations that go beyond conventional wisdom,” said Angara, who retired last year after a three-decade career in politics and public service.

Angara Center is a think tank which the former senator founded “to elevate the level of discourse on domestic and international issues that confront the country.”

It aims to generate rigorous, high-quality law and economics researches that are especially important for informing Philippine policy making.

The recommendations will address the legal, political and diplomatic disagreements in the disputed waters that the experts said could “threaten to erupt into future conflict.”

“The stakes are very high. Finding a solution is urgent. Unless these tensions are managed, we could be teetering at the edge of a serious conflict or military clash,” the experts warned.

They believe that fisheries agreements are a “good start since joint development of oil and gas is unrealistic at this point as maritime boundaries need to be settled first before development of energy resources could take place.”

They said fishery agreements should be pursued for the following reasons:

The South China Sea is a significant fishing ground that is vital to the food security of hundreds of millions of people.

Fish stocks are rapidly being depleted in this area. Biodiversity and regional food security are threatened by overfishing and illegal, unregulated and underreported fishing. Overfishing, among others, is a threat to security.

The rival claimants to the South China Sea region should negotiate fishery agreements on access to areas of overlapping jurisdictions and joint management of fish stocks.

“The next 10 years will be a crucial phase in the long-running saga of the South China Sea dispute. The window of opportunity to make progress is limited. Status quo should have a limited shelf life. No action is no option at all,” said the experts.

The other policy recommendations and proposals put forward by the experts are the following: Arbitration is a peaceful means of settling disputes; negotiation and mediation must be pursued in addition to arbitration; the use of force must be abandoned; and the avoidance of the joint development trap in nonrenewable resources.

On arbitration, they said that “utilizing the rule of law is seen as the best means to arrive at a peaceful solution.”

Arbitration is recognized under the United Nations Charter as a “legitimate means of peaceful settlement of disputes,” they said, a position supportive of the Philippine government’s stance to seek the intervention of a UN arbitral tribunal.

China and the Philippines are contesting the ownership of the Panatag Shoal (Scarborough Shoal), a rich fishing ground in the West Philippine Sea off Zambales province, and a group of islets in the Spratly archipelago off Palawan.

China seized control of the Panatag Shoal after a two-month standoff in 2012, forcing the Philippines to take the dispute to the United Nations in January 2013 for arbitration.

Beijing has refused to take part in the arbitration but under the rules, the proceedings can continue without China’s participation.

The Philippines will file in March a pleading detailing the merits of its case against China.

But in addition to arbitration, negotiation and mediation must be pursued, said the experts.

“Despite arbitration being the most ideal way to solve the issue, it is unfortunately less of a viable option right now because China believes it is not bound by international law. For its part, the UN cannot impose on a country to accept a UN judgment,” they said.

“Since resolution is not in prospect in the immediate present, negotiation and mediation must be pursued as parallel means of reconciliation,” the experts said, noting that “arbitration is without prejudice to negotiations taking place in the course of the arbitration proceeding.”

“[The] use of force must be abandoned,” the experts said, cautioning the Philippines and other claimant countries that “there is a great danger of incidents at sea escalating into crisis.”

“We need a concrete effective crisis prevention and conflict management. All parties involved must multilaterally set principles of ‘no violence’ and make serious steps to address issues related to physical conflict,” they said.

They said parties to the dispute should insist that the Code of Conduct (COC) contain effective measures such as Incidents at Sea (or INCSEA) agreements, and a Code for Unalerted Encounters at Sea (or CUES).

“The Philippines must not sign a [COC] if it is a watered-down version,” they said.

The urgent and immediate priority was to do everything possible to remove the possibility of a declaration of an Air Defense Identification Zone (ADIZ) in the South China Sea, they stressed.

The experts said the Association of Southeast Asian Nations (Asean) could preempt China’s declaring a second ADIZ in the South China Sea by declaring one their own.

In a move that further escalated tensions in the Asian region, China last November declared an ADIZ in the East China Sea, eliciting strong protests from the United States, Japan and South Korea.

An ADIZ is an area in airspace over land or water in which ready identification, location and control of all aircraft are required in the interest of national security.

The Chinese ADIZ included airspace over the Diaoyu/Senkaku islands claimed by both China and Japan.

China required that all aircraft entering its ADIZ must report flight information to Chinese authorities, otherwise it said its armed forces would adopt defensive emergency measures against such aircraft.

The experts also warned of the “joint development (JD) trap” in nonrenewable resources.

“Nonrenewable resources such as oil and gas on the seabed are some of the major reasons of the ongoing disputes. We should study what kind of joint development is possible and what pitfalls should be avoided.