MANILA, Philippines — The Department of Foreign Affairs (DFA) has called on China to clarify its new fisheries law issued by the Hainan province, saying it is “a gross violation of international law.”

“We are gravely concerned by this new regulation that would require foreign fishing vessels to obtain approval from Chinese regional authorities before fishing or surveying in a large portion of the South China Sea,” he said.

The new law was passed late November 2013 and took effect January of 2014.

“This development escalates tensions, unnecessarily complicates the situation in the South China Sea, and threatens tha peace and stability of the region,” Hernandez said.

“This new law reinforces China’s expansive claim under the 9-dash line. It is a gross violation of international law, particularly UNCLOS, and is contrary to the spirit of the Declaration on the Conduct of Parties in the South China Sea,” he said.

UNCLOS refers to the United Nations Convention on the Law of the Sea which is an international agreement defining the rights responsibility of countries to the seas.

China claims the entirety of the South China sea including part of the Philippines 200-nautical mile exclusive economic zone that covers Bajo de Masinloc (Panatag Shoal or Scarborough shoal) and Ayungin shoal in the Spratlys Group of Islands. 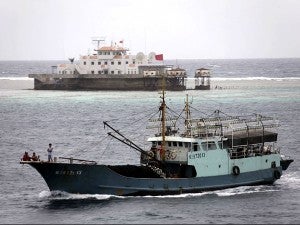 A fishing boat sails past the Meiji reef off the island province of Hainan in the West Philippine Sea in this photo taken on July 20. AP

The Philippines has filed a case against China before the United Nations arbitral tribunal January 2013. China has refused to participate in the case insisting on bilateral talks.

“The Philippines is not the only country adversely affected by these regulations. These regulations seriously violate the freedom of navigation and the right to fish of all states in the high seas, as provided for under UNCLOS,” Hernandez said.

“Under customary international law, no state can subject the high seas to its sovereignty,” he said.

Asked whether this new development can be used in the Philippines’ arbitration case against China, Hernandez said, “It’s up to the legal counsel to include what they want to include in order to argue our case.”

The Philippines is set to submit its written arguments on March 2014.