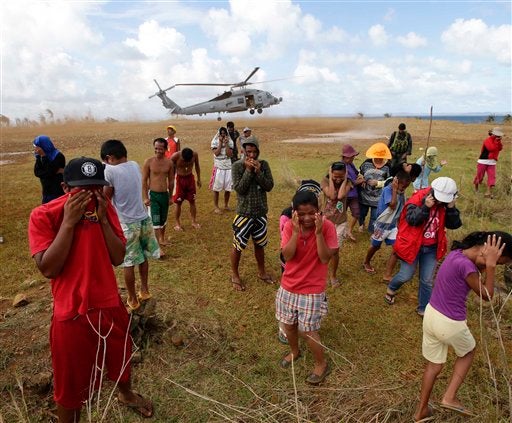 Residents protect themselves from strong wind created by a US Navy Sea Hawk helicopter from the US aircraft carrier USS George Washington as it takes off upon dropping relief supplies for villagers isolated by last week’s super typhoon Yolanda Saturday Nov.16, 2013 on Manicani island, Eastern Samar. AP

ABOARD THE USS GEORGE WASHINGTON — As soon as Navy pilot Matthew Stafford puts his helicopter down in the village of Borongan, he is rushed by dozens of local men who form a line to unload the supplies he has flown in from the USS George Washington aircraft carrier.

On the Philippine islands of Leyte and Samar that were shattered by Typhoon Yolanda (international name Haiyan), there is no doubt about it: the US military has been a godsend.

“It is awesome to see this,” says one grateful villager. “They are saving us.” 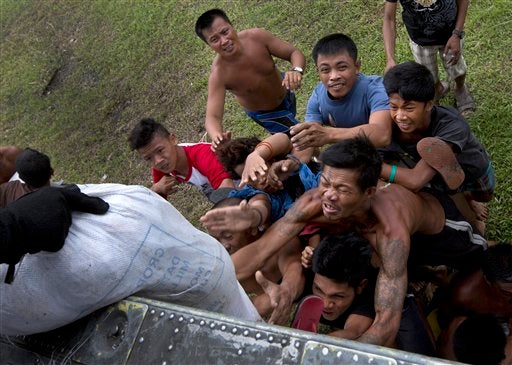 But while US military support can be critical when disasters like Yolanda strike, staging massive humanitarian relief missions for allies in need isn’t just about being a good neighbor. They can be a strategic and publicity goldmine for US troops whose presence in Asia isn’t always portrayed in such a favorable light — and a powerful warning to countries that aren’t on board. 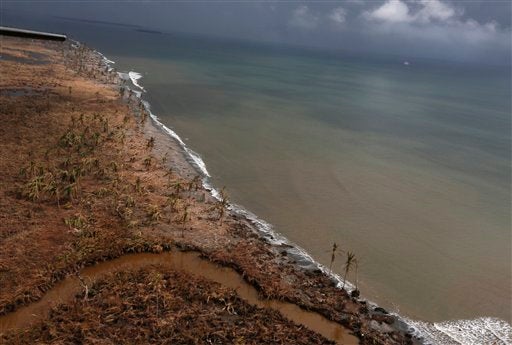 “These disasters are not unique only to the Philippines. It will send a signal to all of Southeast Asia, to Asia, that the US is serious about its presence here,” said Philippine political analyst Ramon Casiple. “It’s easy to translate this capability for disaster handling into handling warfare. This is the new orientation of the task forces.”

From the military perspective, humanitarian missions like the ongoing Operation Damayan in the Philippines offer concrete benefits — the chance to operate in far-flung places, build military-to-military alliances and get realistic training — that they may later apply to their primary mission, which will always be fighting and winning wars.

“Crisis response planning is a skillset for the military, so when you have an opportunity to execute crisis response it’s good for your planning team,” said Rear Adm. Mark C. Montgomery, who commands the George Washington strike group, stationed offshore in the Gulf of Leyte. “So, sure, there is a benefit there. But in reality the reason we do this mission is because in the Navy’s list of missions this is one of the significant efforts we plan for.”

In the week since the disaster, the Philippines has started to receive support from military forces around the region. Australia, Indonesia, Japan, Malaysia, Singapore, South Korea and Taiwan have sent aircraft or personnel and more support is expected soon from Brunei, Great Britain, New Zealand and Thailand. 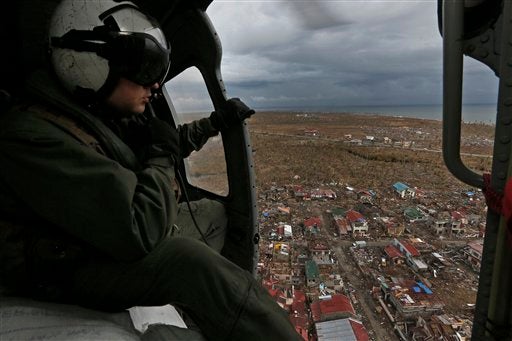 A crew member of a US Navy Sea Hawk helicopter from the US aircraft carrier USS George Washington looks at the devastation caused by Typhoon Yolanda near the coastal town of Tanawan, central Philippines Sunday, Nov. 17. 2013. AP

But none has come close to matching the US. Equally importantly, America’s regional rival China has not sent any military personnel, and contributed relatively tiny financial aid.

“This is being done in a big way that highlights the meager response of China — that’s the politics there. They’re saying China is not actually your friend in the region,” said Casiple

“I’m sure China is watching and assessing,” he said. China announced Sunday it is ready to send rescue and medical teams to the Philippines, but did not say when the teams would depart.

For US allies like the Philippines, Vietnam, South Korea, Thailand and to some extent Indonesia, it is an affirmation of the US commitment. For others — Cambodia, Laos and Myanmar who are more closely aligned with China — he said the mission is a not-so-subtle message that the U.S remains the biggest power in the region.

Within hours of the typhoon, US Marines were on their way from their bases in Japan to assess the damage and plan out their response. Within days, the George Washington was pulling out of Hong Kong to lead its half-dozen ship battle group to the Gulf of Leyte. By the time they arrived, the US Air Force was already in action.

According to the Marines, US military aircraft have put in nearly 480 flight hours in 186 aircraft sorties, moved nearly 1,200 relief workers into the devastated city of Tacloban and have airlifted nearly 2,900 displaced people from the affected areas. On Saturday alone, they delivered more than 118 tons of food, water and shelter items to Tacloban, Borongan and Guiuan — some of the hardest-hit regions.

More than 600 US military personnel are currently ashore in the Philippines. The USS George Washington strike group adds another 6,200 sailors supporting air operations, and 1,000 Marines and sailors with the 31st Marine Expeditionary Unit are expected to arrive later this week.

“Getting to help people is actually the primary thing that we signed up to do,” Toby Pickens, a Navy rescue diver, said after helping off-lift supplies during several hours of helicopter operations from the George Washington. “It’s not so much the combat that we are looking for … Compared to anything else we do, I would say that this is by far the tops.”

US military public affairs offices, meanwhile, have been pushing out a torrent of photos, text updates, videos and media packages to play up that message of friendship and support.

Col. Miguel Okol, a spokesman for the Philippine Air Force, said that while he is grateful to the US assistance, he is also keenly aware that this is a military operation, with military implications.

He noted that by working together on humanitarian missions, US and Filipino soldiers are in effect conducting joint military exercises, such as while operating C-130 transport planes. The US has deployed 15 of them in the Philippines, which has three of its own.

“No country buys these kind of transports” purely for humanitarian purposes, he said as he watched two C-130 transport aircraft, one from each country, unload supplies at Villamor Air Base in Manila.

“Together, now, we are doing real operations,” he said.

Aquino touches down in Guiuan