Mindanao nun tags US military use of drones ‘killer program’ 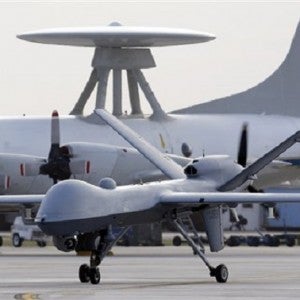 A Predator B unmanned aircraft taxis at the Naval Air Station in Corpus Christi, Texas in this 2011 file photo. AP

KIDAPAWAN CITY, Philippines—Washington’s drone program was branded “killer program” by a Mindanao-based nuns’ association as it called on the government to reject attempts by the Americans to put up a base in the country.

Sister Noemi Degala, executive secretary of the Sisters’ Association in Mindanao (Samin), said in a statement e-mailed to the Inquirer that in Pakistan alone, under the so-called global war on terror, US drone strikes have killed as many as 3,549 people, 197 of them children.

“This is the fundamental moral issue why the drone program of the United States must be rejected,” she said.

Degala said the program acts as “the prosecutor, judge and executor for and on behalf of a US president and military situated thousands of miles away from the targets.”

Degala said the US government was so drawn to its drone program that the use of unmanned aircraft has become “a new form of idolatry or the idol worship of instrument of death at the expense of people’s lives, lands and human rights.”

“It contradicts the words of Pope Francis opposing instruments of death in our times,” Degala said, adding that the US was now “the calf that demands the world’s absolute obedience.”

In Zamboanga City, Mayor Maria Isabelle Climaco-Salazar maintained her opposition to the prolonged stay of US forces in the city and decided to skip the ceremonial turnover of command for the US-led Joint Special Operations Task Force Philippines as a manifestation of her protest.

US forces have been in the city since 2002 and are deployed there under the Balikatan defense training program.

Such a military rite was usually attended by local government officials in the past in honor of visiting diplomats and foreigners.

Philippine military officials were mum on Salazar’s absence but it did not deter them and US officials – led by Ambassador to the Philippines Harry Thomas – to go on with the affair and witness the assumption of new JSOTFP commander Col. Robert McDowell.

McDowell replaced Col. Mark Miller, who was JSOTFP commander for over three years.

“I expounded to them (US and Filipino military officials) the issue of JSOTFP that has to be defined. Through the years of their presence in Zamboanga, they have not given us their long-term plan and the national government is up again in discussing this issue (of US bases),” Salazar said last Tuesday.

She said she even went as far as asking the US State Department about the presence of American soldiers in the city but she was instead told to “ask this question to the Philippine government.”

Thomas emphasized that there was an agreement between Manila and Washington on the presence of US forces in the country.

Thomas said the US government understood that any agreement has to be in accordance with the Philippine Constitution, that was why “we have people coming here to discuss that.”

He did not directly comment on  Davao City Mayor Rodrigo Duterte’s and Salazar’s opposition to the use of the country’s airfields by US forces.

Instead, Thomas said, Washington could assure the public  that the stay of US forces here would not violate any law.

“I am not so sure what others may have talked about but I can assure you we would do nothing even not propose anything that would not be in accordance with the Philippine Constitution,” he said.