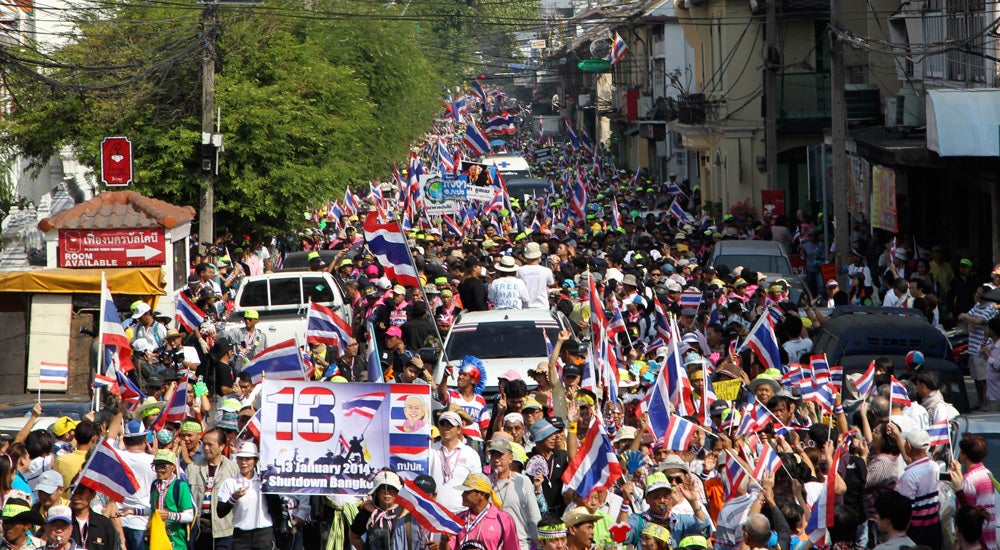 MANILA, Philippines – The Philippine Embassy in Thailand has warned Filipinos in the country to avoid wearing red and yellow so they would not be accused of showing support for the opposing political parties.

“Large crowds and demonstrations should be avoided as there have been incidents of violence with some fatalities,” the Embassy said in an advisory posted on their Facebook page Thursday evening.

“Participating and/or showing support in any form to any of the parties is strongly discouraged.  For information, the red and yellow colors are closely identified with some of the parties involved,” it said.

Anti-government protests have been held against the administration of Prime Minister Yingluck Shinawatra with one clash between government supporters and protesters last November 30 resulting in three fatalities and 52 injuries.

The demonstrations stemmed from allegations that the Prime Minister was acting to help her brother, former Prime Minister Thaksin Shinawatra who was ousted in a military coup in 2006, escape corruption charges. 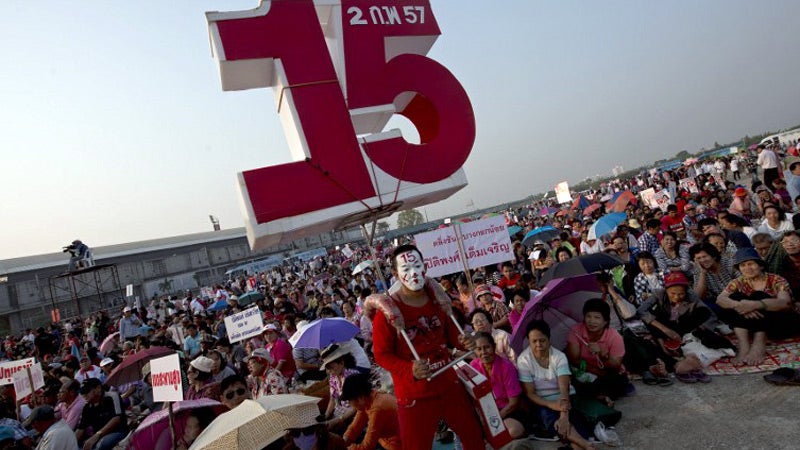 Supporters of the Puea Thai party attend the election campaign in Bangkok on January 4, 2014. Thai Prime Minister Yingluck Shinawatra’s party kicked off campaigning for February elections in the face of an opposition boycott and protester plans to “shutdown” Bangkok in a bid to derail the vote. AFP PHOTO / PORNCHAI KITTIWONGSAKUL

The Philippine Embassy in Thailand said, however, that despite the protests, Bangkok’s airports, as well as all modes of public transportation, are fully operational.

“However, those visiting Bangkok at this time may experience increased traffic congestion and security measures,” it said.

“Given the fluidity of the situation, the places to avoid could change periodically.  Everyone is therefore advised to continue being vigilant and to closely monitor developments,” the embassy said.

Thaksin’s overthrow in 2006 by generals loyal to the king ushered in years of political turmoil and rival street protests by the royalist “Yellow Shirts” and Thaksin’s supporters, known as the “Red Shirts”.

Yellow and red are also popular colors in the Philippines, associated with religious festivals in the Catholic country.

And just like in Thailand, the hues are rich in historical and political symbolism.

Yellow is the signature color of supporters of Philippine President Benigno Aquino III and his late mother Corazon Aquino.

Red is the campaign color of his family’s arch-political foe, the heirs of the late strongman Ferdinand Marcos.

Marcos’ 20-year rule was ended by a bloodless popular revolt by yellow-clad street protesters that propelled the younger Aquino’s mother to the presidency in 1986.

The embassy also reiterated an earlier warning by the Philippine foreign department for Filipinos to avoid non-essential travel to Bangkok and to steer clear of street protests.

Anti-government demonstrators have announced plans to stage protests in Bangkok from Monday to block February elections called by the government. AFP