JICA tests water-purifying equipment for use by ‘Yolanda’-hit areas 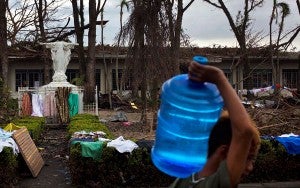 DAVAO CITY, Philippines — A Japanese technology that could turn contaminated water into safe, potable water is now being pilot-tested by the Japan International Cooperation Agency (JICA) in a typhoon-hit area of northern Cebu province.

In an email sent to the Philippine Daily Inquirer on Thursday, the Japanese aid agency said the technology would soon be used in other “Yolanda”-devastated areas in the Visayas “to keep water safe for drinking” by affected individuals.

The truck-mounted mobile water-siphon-and-purifying equipment is now being used to process river water in Daanbantayan town.

“This compact technology, easily loaded on a truck to move around, can filter through sand and gravel, and treat water to make it safe for drinking,” Jica said.

Daanbantayan is one of Visayas areas where existing water supply systems were damaged by the typhoon, according to JICA. “The lack of electricity in the area has also worsened the water supply situation,” it added.

The mobile siphon tank and water processing equipment, developed by Japanese firm Nihon Genryo, was rated to supply water to about 1,400 households in Daanbantayan.

“This technology from JICA is a great help to us as water supply to typhoon-stricken villages is very essential,” JICA said.

“It will take some time to recover our water supply systems because most systems are heavily dependent on deep groundwater that needs electricity to be pumped up. But electricity has not yet been fully recovered in Daanbantayan especially since it is away from the backbone network,” the mayor was quoted in the statement as saying.

The Japanese aid agency said similar water processing equipment would also be deployed in other Yolanda-devastated areas where electricity was hardly restored as well.

“We are sharing Japanese technology to help improve the water supply, not only in typhoon-damaged areas, but also in other parts of the Philippines. With help from the local government, we are building on JICA’s past technical assistance to address water security and safety challenges in various areas,” JICA Philippines chief representative Takahiro Sasaki was quoted in the news release as saying.

JICA said the water filtration technology introduced in Daanbantayan would be subsequently shared with the Metropolitan Cebu Water District (MCWD) so it can expand its areas of coverage.

“Metropolitan Cebu is currently the second largest urban area in the Philippines composed of seven cities and six towns. Rapid population and lack of water infrastructure have affected further economic development in the area,” JICA said.

Recently, JICA also turned over a rehabilitated water facility and other equipment to the Cagayan de Oro City Water District (COWD), where thousands of people continue to suffer from lack of water due to the devastation wrought by typhoon “Sendong” there.

“We hope that the rehabilitated water facility will help set a standard in making public facilities and resources disaster-resilient in the country,” Sasaki said.

Read Next
Norway to help Philippines in talks with rebels
EDITORS' PICK
Eleazar: PNP open to ICC probe but PH judicial process is working
P258M shabu seized, Chinese national arrested in Manila drug bust
Gilas out to prove Korea win not a fluke; Tab fires back at ‘lucky shot’ remark
SANTIS Delicatessen: The road to survival is sweet and savory
Man wounded as raid on illegal cockfight in Isabela leads to shootout
Piolo Pascual: The Ultimate Heartthrob continues to level up
MOST READ
Palace: Face shields no longer needed to be worn outdoors
LOOK: ‘Low vaccination’ turnout in 4 Manila sites after no walk-in policy
Lacson or Pacquiao a possible presidential candidate for NPC – Sotto
‘Pinadudumi ang politika:’ Sotto wants FB to shut down ‘troll farms’ until after 2022 polls
Don't miss out on the latest news and information.