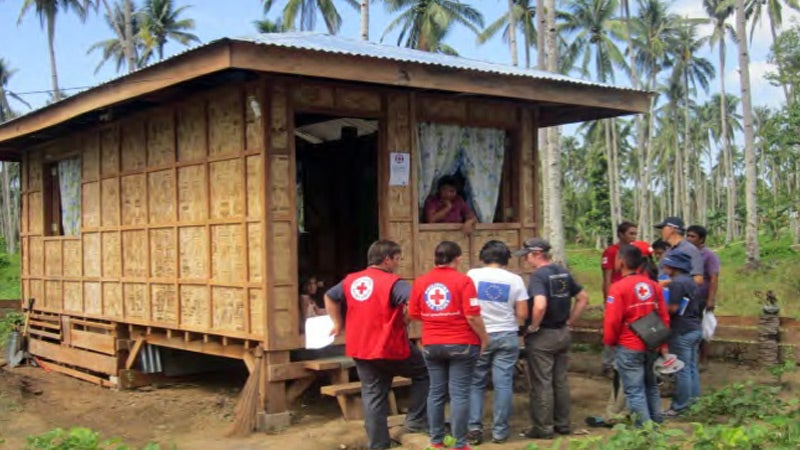 MANILA, Philippines—More than a year since Typhoon “Pablo” (international name: Bopha) swept across Mindanao, some 4,000 families in Compostela Valley and Davao Oriental will finally move back to safe shelters.

The European Union on Thursday announced the completion of houses for victims of the typhoon that destroyed or damaged some 250,000 houses and commercial and public buildings.

EU Ambassador to Manila Guy Ledoux on Thursday led the ceremonial turnover of home ownership certificates to some 200 families in Monkayo town in Compostela Valley, among areas worst hit by Pablo in December 2012. The typhoon left more than 1,000 dead and some 850 missing.

“The road to recovery and reconstruction is easier when all the stakeholders actively participate—the affected families, local government units, international organizations and nongovernment organizations,” Ledoux said during the rites at Barangay (village) Macopa on Thursday.

The European Union funded the reconstruction and repair of houses for 4,000 families, with a P150-million grant funneled through the International Federation of Red Cross and Red Crescent Societies, the delegation said on Thursday.

It also provided a separate P440 million for the distribution of emergency relief materials to affected families during the emergency, including food, water, sanitation and hygiene supplies, medical care and livelihood.

Of the 4,000 housing units, some 650 were completely rebuilt while the rest were repaired.

Families with damaged houses were given P10,000 to purchase materials for repairs while those whose houses were completely destroyed will be moved to 20-square-meter homes built at a cost of between P30,000 and P75,000.

“These shelters are constructed in lots either owned by the families themselves or in public lots assigned by local government units. Lots are carefully selected to ensure that the shelters are built in hazard-free locations,” the EU delegation in Manila said in a statement.

Ledoux said the homes were built or repaired with the close involvement of the community and support of Red Cross engineers and workers, ensuring “efficient and cost-effective results.”

The houses were either built or repaired using native materials, including nipa and coco lumber. The single detached units resemble nipa huts and were built on survivors’ lots, so long as they are away from designated danger zones, or on locations assigned by the local government. Each unit has a kitchen while communal restrooms were constructed in the villages.

The European Union provided more than P607 million in aid for the Pablo victims. The bloc has also been a major donor in the relief and early recovery efforts for victims of Supertyphoon “Yolanda” last month, providing nearly P2.5 billion in assistance.