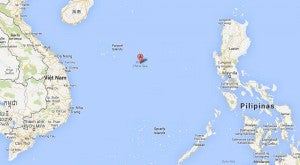 The West Philippine Sea was the site of a two-month standoff between Philippine and Chinese vessels in 2012.

From early April to mid-June in 2012, Chinese and Philippine ships faced off with each other at Panatag Shoal in the West Philippine Sea after Chinese vessels stopped the Philippine Navy from arresting alleged Chinese poachers.

The encounter resulted in about 50 bilateral consultations between China and the Philippines following the standoff.

Bilateral consultations between the Philippines and China over the disputed waters have been held for nearly two decades.

But after fruitless talks, the Philippines filed a motion for arbitration in a United Nations tribunal in January last year as it sought for a peaceful solution to its territorial dispute with Beijing over territory in the West Philippine Sea.

In its submission, the Philippines asked for the nullification of China’s so-called nine-dash-line claim, which encompasses almost all of the South China Sea, including parts within the West Philippine Sea, the waters within Manila’s 327-kilometer EEZ.

On Jan. 26, 2013, President Aquino, talking to reporters on the sidelines of the World Economic Forum in Davos, Switzerland, cited two separate incidents of Chinese harassment of Philippine fishing boats at Panatag Shoal (Scarborough Shoal) off the coast of Zambales province.

China has rejected the UN proceedings, citing its “indisputable sovereignty” over the territory but the case has progressed despite Beijing’s refusal to participate in the arbitration.

In September last year, President Aquino canceled a planned trip to China for a trade fair in Nanning after Beijing reportedly required the withdrawal of the arbitration case as a condition for the trip.

On July 11, 2013, nearly six months after the Philippines filed the complaint, the five-member tribunal tasked to deliberate the case met and drafted the rules of procedure to govern the proceedings.

On May 10, 2013, the Philippines protested the presence of a fleet of Chinese fishing boats, accompanied by patrol vessels at Ayungin Shoal (Second Thomas Reef), which lies 196 km from Palawan province, well within the Philippine EEZ.

Ayungin Shoal is a strategic gateway to Reed Bank, believed to be rich in oil and natural gas. Beijing says the shoal is part of the Spratlys, a group of 250 islets spread over 427,350 sq km, claimed entirely by China, Taiwan and Vietnam and in part by Malaysia, Brunei and the Philippines. Ana Roa, Inquirer Research