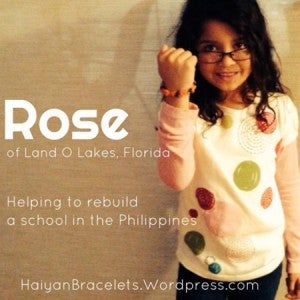 BERKELEY, California—What started out as a hobby turned into a fulfilling dream for a 10-year-old Filipino-American student who, with the help of her 13-year-old sister, raised $102,160 to help survivors of Supertyphoon “Yolanda” (international name: Haiyan) in the Philippines.

After raising $2,160 from selling colorful hand-made bracelets in December, fifth-grader Malaya David received $100,000 from an anonymous donor—all to rebuild a school in Tanauan, in the province of Leyte, one of the towns ravaged by Yolanda.

The relief money Malaya raised may have been the highest so far coming from the Fil-Am community in California.

She was ecstatic after raising her first thousand. “I’m so excited!! I made a goal to raise $1,000 by the end of December and we did it in just four days! This is just our first-round goal… I am not done!” Malaya posted on her website http://haiyanbracelets.wordpress.com/ .

“Maraming, maraming salamat!!!!! Thank you everyone for your support, your inspiring comments, your donations. Thank you to my family, thank you to all our friends. Your support has inspired me to keep going, the children in the Philippines need our support to rebuild school destroyed by Haiyan,” her post said.

Amihan David, mother of Malaya who spearheaded the bracelet campaign, told INQUIRER.net: “The whole idea was cultivated during the weekend of Thanksgiving last year.”

Malaya and her sister, 13-year-old Tala, were watching a video in YouTube, of how balloons were made. The two had been making bracelets as a hobby, inspired by the message of the song “We Are the World.”

Making colorful, braided bracelets has been a craze among the young who give them away as gifts to friends and loved ones.

David encouraged her daughters to make and sell the “Haiyan bracelets” for $10 each. The bracelets come in small, medium and large sizes. Malaya drafted a list of friends and family members to tell them of their idea.

Malaya and Tala started making bracelets and selling them during their free time. They drew help from about 200 people, including cousins, friends and various families. They sent them e-mails and got lots of responses. They also set up a website to support the campaign.

The bracelets went viral among other young people who heard about it—from her school in Berkeley, California, to Long Beach in Los Angeles and as far as Maryland and Seattle, Washington. Her website reports, for example, that “Rose and Lily” of Land Oaks, Florida, have started making bracelets inspired by Malaya.

In her young mind, Malaya felt sorry for the school kids in Leyte, “She said I have a school (to go to), why can’t everybody have one?” her mother recalls. “So, raising money to benefit her countrymen inspired her to help the schoolchildren to further their education.”

Malaya, her sister and cousins went to the San Francisco Parol Festival in Yerba Buena, and despite the cold weather, approached complete strangers to sell the Haiyan bracelets. 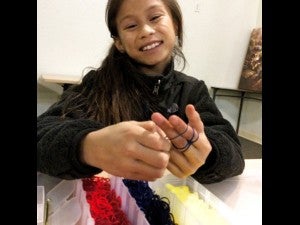 “We brought all our Haiyan bracelets and sold them to as many people as possible,” Tala says. “After about one hour in the freezing weather, we sold about $120 worth of bracelets, including donations. This was the first time we talked to people face-to-face about our project in public, we passed out beautiful flyers made by my godmother Jamie to help spread the word.”

By the end of December, Malaya and Tala were able to raise $2,160 from selling the bracelets. Then a donor gave $100,000 after receiving an e-mail sent by Malaya to a family friend. The donor declined to be named.

“They’re still gathering some donations,” their mother added. Malaya wants to keep raising more money for schools. Her goal is to raise $3,000 by June 2014.

With advice from their grandfather, Amado David, and mom, Amihan, the children were eyeing building not only one school in Tanauan, but possibly another one. “We might even hit two schools and not just rebuild but we’re looking into sustainability and wages of workers,” Amihan said.

“Tanauan, like Tacloban, is also a devastated town and we feel some connection here in the Philippines,” David stressed, “Tacloban has got a lot of attention already.”

“Tanauan Mayor Pel Tecson said it will cost around P1.8 million to build the destroyed school,” Amihan David said, “and because there is enough money, it is possible to build one more.”

The mayor has expressed appreciation for the David children’s efforts when the news reached his office. Two days ago, Mayor Tecson apparently sent a word through the Davids’ contacts in Tanauan, giving public recognition to Malaya and Tala and the David family for all their efforts in raising funds to build new schools.

The David family is looking into the tentative rebuilding time frame to commence in March of 2014. Amihan David stressed that accounting for the money and how it is spent is very important.

The bulk of the donation was paired with Feed the Hungry (Foundation), Philippine Chapter, because they covered a wide amount of the projects and they have engineers, she explained.

Amihan reported that Feed the Hungry is placing a button on Malaya’s website (Haiyanbracelets.wordpress) for people to make tax-deductible donations. “Large donations given under 501C (non-profit status) can get tax breaks, and my father and I are the authorized signatories for the account,” she said.

“It’s going to take years to build there (Tanauan), we want to encourage people to make T-shirts or any other hobbies as we call everyone to action,” David said, “Get involved with what you like. You could mass-produce those bracelets, create a circle of friends for fundraising.”

Yolanda: After the Storm