WASHINGTON, DC—Filipino-American Sean Reyes has been sworn in as state attorney general of Utah, becoming the first Asian-American to hold a statewide post in that state. 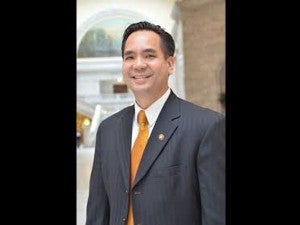 Reyes, 42, is the son of immigrants with Filipino and Spanish roots. Married with six children, he was raised in Southern California and received his law degree from UC Berkeley in 1997.

At his swearing in, Reyes vowed “to restore public trust” in an office devastated by scandal, and “create a culture change” through internal, external and policy changes.”

Utah Governor Gary Herbert, who appointed Reyes to the post after his predecessor resigned, said, “Reyes’ rise opens a new chapter for the state and the attorney general’s office, which persevere in the face of adversity. He has the right background and, most importantly, he has the right demeanor to take on what I consider a new beginning for the attorney general’s office.”

“As Filipino-Americans, we are elated that one of our own has gained the distinction and honor of serving as Utah’s top law enforcement officer,” Navarra said.

“We wish him well as he undertakes a challenging responsibility, one that requires leadership and legal skills, high professional standards and strong commitment to public service.”

Before taking over as attorney general, Reyes served as general counsel for a Utah media and technology company, eTAGz. He also served as a small claims judge, a partner with venture capital firm Accelerate Ventures, and a member of the boards of many non-profit institutions, including one conducting education against fraud. He was also involved with a National Commission established by former President George W. Bush to advise him on Hispanic-American issues.

Apart from his professional duties, Reyes devotes his time to community outreach programs. In 2008, Reyes was the first person to be awarded the title “Outstanding Young Lawyer of the Year” by the American Bar Association.

Reyes ran for Attorney General of Utah in 2012 against John Swallow. He lost the primary election with a margin of 69 to 32 percent. Swallow resigned last December.

The GOP State Central Committee then selected Reyes as one of three candidates on Dec. 14. Reyes, who will serve out the remaining two years of Swallow’s term, will have to run for election in November this year.