PH can learn from Japan about disaster preparedness 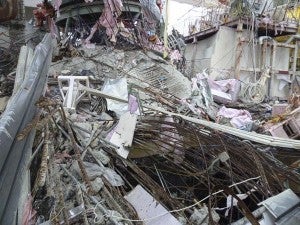 SHIZUOKA, Japan—As the Philippines starts to rise from the devastation wrought by Supertyphoon “Yolanda,” it could benefit from adopting certain practices of one of Japan’s prefectures where preparing for disasters is a constant endeavor involving the government and residents.

For 37 years and counting, the Shizuoka prefecture has been bracing itself for an 8-magnitude earthquake and tsunami—predicted in 1976 to hit the Tokai region any time.

It has a level of preparedness that Shizuoka officials believe could serve well other disaster-prone countries, such as the Philippines.

When Yolanda made landfall in Leyte and Samar provinces, among the problems that compounded the death toll were the crippled communication lines, which hampered rescue and relief operations; the refusal of some to evacuate to safer ground; and the failure of residents and officials to understand or explain just how powerful a storm surge could be, which, as it turned out, was as destructive as a tsunami.

More than 6,000 people are confirmed to have died from Yolanda. Hundreds of towns have been reduced to rubble. Reconstruction is expected to start soon, backed by a P100-billion fund.

In Shizuoka, key components of its disaster preparedness include the education and training of residents to respond to calamities; warning devices and an information-gathering and dissemination system to immediately identify blocked routes and devastated areas; and redundant communication lines between the national and local governments, including a satellite-based one, just in case one system would be knocked out by strong winds or landslides.

The great temblor predicted to hit Shizuoka, now known as the Tokai earthquake, has not yet taken place nearly four decades after it was predicted, though experts continue to believe it could happen any day.

The prefecture hasn’t stopped getting ready for it, according to Shizuoka officials who recently met with participants of the Nihon Shinbun Kyokai-Confederation of Asean Journalists fellowship program.

To date, the prefecture has spent nearly $20 billion to ready itself for the calamity, according to Satsohi Kobayashi, director of the Shizuoka Prefecture Disaster Preparedness Center.

Officials regularly assess the preparedness measures to plug weaknesses and help save the lives of the prefecture’s 3.8 million residents, Kobayashi added.

But as much as the local government is preparing for unprecedented calamities, officials also underscored the need for the citizens to take an active role in saving themselves during disasters.

The Shizuoka Prefecture Disaster Preparedness Center takes part in involving citizens in getting ready to respond to a possible massive quake and tsunami, said Kobayashi.

It trains residents to be leaders in disaster management, which includes holding regular emergency drills and night evacuation training in their respective communities, and educating them about the dangers that calamities could bring.

There is generally a high level of community participation in such measures, noted Takamichi Sugiyama, assistant director of Shizuoka’s emergency management department.

Each community has its own volunteer organizations that work to ensure that residents know the evacuation routes and where to seek shelter in case of a quake or tsunami.

This is crucial since the government, even with its resources, cannot always rescue and support all residents, Sugiyama added.

“Therefore, it’s most important that the citizens themselves within their community will try to prevent and manage disasters. In that sense, I think, the citizens play a big role,” he said.

The prediction that the Tokai earthquake could occur anytime was based on the theory that three massive earthquakes called the Tokai, Tonankai and Nankai earthquakes occur periodically, every 100 to 150 years, said Sugiyama.

The Nankai and Tonankai earthquakes already occurred in 1944 and 1946, hence the belief that the Tokai earthquake is likely to happen any time.

The Tokai earthquake is a plate-boundary temblor, caused by the clashing of the Philippine Sea plate and the Eurasian plate, off Suruga Bay in Shizuoka. Given its location, it could also cause a tsunami aside from destructive tremors inland.

In Metro Manila, the seat of the national government, a strong quake could emanate from the Marikina Valley Fault System, according to experts. Recently, officials called for an earthquake survey to prepare the metropolis for the big one, citing findings of an Australian agency that predicted that some 37,000 people would die in the event of a 7.2-magnitude temblor.

Shizuoka is nearly 200 kilometers from Tokyo. It is known for its green tea and is popular with tourists who troop to Miho-no Matsubara, a pine grove along the shore that offers a scenic view of Mt. Fuji, Japan’s tallest mountain that was recently named a World Cultural Heritage Site.

But behind the idyllic vista lies the threat of a massive temblor.

In 1979, or three years after the prediction of the Tokai earthquake, the Shizuoka prefecture started to take more practical efforts toward disaster prevention, according to Kobayashi.

Emergency facilities such as warning systems and pre-identified evacuation centers designated for earthquakes and tsunamis are in place. All these are managed at the prefecture’s headquarters dedicated to this task.

In training the residents to help save themselves from disasters, there is also a particular focus on encouraging the elderly, who make up a good portion of the population, to understand how important it is for them to be prepared. During the Kobe earthquake in 1995, many of those who perished were the elderly who were unable to get out and take refuge in time.

The disaster preparedness center also provides detailed information to visitors on the various ways to prepare for calamities, hosting exhibits and learning-by-experience sections. It has an earthquake simulator so that visitors could feel just how a level 7 intensity earthquake would be like.

The Shizuoka prefecture government also boasts of an advanced disaster information network system for gathering and disseminating data relating to a calamity.

This is backed up by two types of communication networks—towers set up on mountain slopes and a communication satellite. The satellite is important so that in case of a landslide in the mountains, Shizuoka’s communications system would still function, explained Sugiyama.

The system is also based on cloud computing technology, with the servers placed outside the prefecture so that these would not bog down in case of an earthquake or massive flooding.

The collected data, which could include the extent of damage and the location of collapsed buildings, would be quickly transmitted to the concerned agencies and authorities. The prompt gathering of information is vital since three days is the limit to rescue people from collapsed buildings, said Sugiyama.

The disaster information network system, likewise, collects data on blocked roads so that alternate routes, especially for relief and emergency vehicles, could be identified. It also keeps track of the status of the different evacuation centers.

As for tsunami prevention, Shizuoka has seawalls covering 280 kilometers of its 500-km shoreline. After the massive 2011 earthquake in East Japan which triggered a tsunami that nearly leveled Fukushima, the prefecture began a study to determine if the seawall’s height needs to be raised.

Through the years, the Shizuoka prefecture has been beefing up the strength of its buildings and other infrastructure to withstand the massive shaking of the ground and the possible onslaught of a tsunami.

At present, 99.4 percent of government buildings in Shizuoka are earthquake-resistant and the rate is expected to reach 100 percent by 2015. For the different level schools, the rates are 97 to 99 percent, according to Kobayashi.

When it comes to residences, most of which are wooden houses, only about 80 percent have been strengthened to incorporate anti-earthquake measures, he said.

Ensuring that the remaining 20 percent of wooden houses are protected is a difficult challenge for the prefecture government, he added.

To help residents strengthen the structure of their homes, the government has offered a subsidy of about $7,000 per residence. But making a house fully earthquake-resistant is much more costly at about $10,000. This is why there are those who are unable to complete this task, he said.

The Shizuoka Shimbun regularly reports on disaster management issues, including weaknesses in the plans as well as the concerns of citizens.

It has leased a helicopter for the use of its reporters and photographers whenever they need to travel to disaster areas and cover other incidents that require quick transportation, according to operations department manager Tetsuya Ishibe.

But no system is perfect and in Shizuoka certain areas in disaster-preparedness need to be improved.

As Kobayashi noted, not everyone can afford to retrofit their homes to make these earthquake-resistant.

Relocating residents from areas predicted to be in the direct path of a tsunami is also easier said than done, he said.

“Realistically speaking, your life depends on that area so it’s quite difficult to relocate because of a prediction,” he said.

There is also the matter of public interest in disaster preparedness, which is not constant, he said.

Kobayashi said he hoped there would be a common seismic intensity measurement among countries, even just in Asia, to help promote objective guidelines for measuring the earthquake-resistance of a building, for instance, and for formulating a common plan of action for emergencies.