Revelers start ringing in 2014 with fireworks 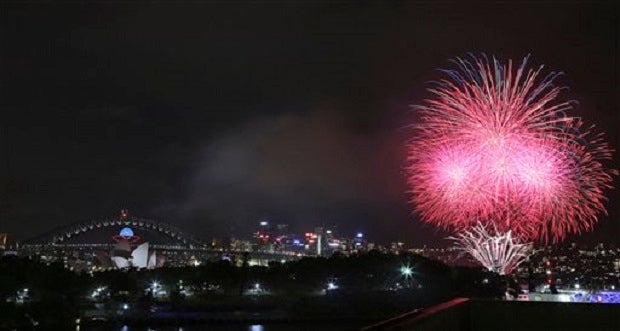 Fireworks explode near the Harbor Bridge and the Opera House during New Year’s Eve celebrations in Sydney, Australia, Tuesday. AP

CANBERRA, Australia—New Zealand rang in the New Year with multicolored fireworks erupting from Auckland’s Sky Tower at midnight Tuesday as thousands of cheering revelers danced in the streets of the South Pacific island nation’s largest city.

Early pyrotechnic shows erupted over Sydney Harbor, dazzling hundreds of thousands viewers ahead of the main event in Australia and Dubai will later try to create the world’s largest fireworks show to ring in 2014.

Sydney officials promised that the Australian city’s renowned pyrotechnics show would be more extravagant than ever, with more than 1.6 million revelers expected to line the harbor for a view.

Dubai, home to world’s tallest tower, is known for its glitz, glamor and over-the-top achievements, and this New Year’s Eve the city is planning to break another record by creating the largest fireworks show ever.

The 6-minute extravaganza will include 500,000 fireworks from 400 firing locations, all synchronized by 100 computers from stations across the city, said Barrett Wissman, co-chairman of IMG Artists that is managing the event. Guinness World Record officials will be on hand to measure the scale of the event.

Wissman said the display will cover 30 miles (48 kilometers) of seafront. “It is really mind-blowing, the size of this,” he said.

In the Philippines, more than 260 people had been injured by firecracker blasts and celebratory gunfire ahead of New Year’s Eve celebrations, one of Asia’s most violent revelries.

Department of Health spokesman Dr. Eric Tayag said he expected the number of injuries to rise sharply when Filipinos ignite powerful firecrackers to end a year marked by tragic disasters, including a Nov. 8 typhoon that left more than 6,100 dead and nearly 1,800 others missing.

“Many here are welcoming the new year after losing their mothers, fathers, siblings and children so you can imagine how it feels,” said village chief Maria Rosario Bactol of Anibong community in Tacloban, the city worst hit by Typhoon Haiyan. “I tell them to face the reality, to move on and stand up but I know it will never be easy.”

In Sydney, the fireworks will be launched from four sails of the Sydney Opera House for the first time in more than a decade. The local council said the secret fireworks feature that will erupt on the Sydney Harbor Bridge will be twice the size of last year’s centerpiece of the show.

China was planning to count down to the New Year with light shows at two spectacular and historic locations — part of the Great Wall near Beijing and at the Bund waterfront in Shanghai.

“Since the government started its campaign to crack down on luxury spending and promote frugality, our business with government agencies has been in decline,” said Mao Xiangfei. “In the past, government clients accounted for about 10 percent of our business, but now it’s zero.”

But in one polluted Chinese city, the celebrations were slated to be quieter as authorities in Wuhan in central Hubei province called off their annual New Year fireworks show and banned fireworks downtown to avoid making the smoggy air worse.

In Japan, thousands of visitors, some donning kimono, will pray, ring a bell and toss coins as offerings at shrines, wishing for health, wealth and happiness. Temple bells will ring the customary 108 times, for the 108 causes of suffering according to Buddhism, and welcome in the Year of the Horse.

Japanese are hopeful about the economy for the first time in years after some signs of revival under Prime Minister Shinzo Abe, whose easing lending policies and pump-priming measures have been dubbed “Abenomics.”

Among those upbeat about what the new year might bring is Junya Sakata, a 23-year-old Tokyo waiter looking forward to taking sommelier classes next year so he can move up in his career.

“I hope the economy will keep improving, building up to the 2020 Olympics,” he said, which will be held in Tokyo. “So many things happened this year, but I was able to grow. Maybe next year I will find a girlfriend.”

In North Korea, a group of tourists, including Americans, planned to watch fireworks in Kim Il Sung Square and watch the Pyongyang Bell strike midnight, said Andrea Lee, CEO of Uritours, a tour group specializing in travel to North Korea.

“There were a lot of people out on the streets today for an outdoor dance event, and cars filled the streets,” Lee said.

In Hong Kong, tens of thousands will turn out to watch the fireworks display over the southern Chinese city’s famed Victoria Harbor.

Pyrotechnics will be fired off near the Kowloon peninsula and from the tops of seven skyscrapers on Hong Kong Island. A British colonial-era canon will be fired at midnight in a tradition dating from the end of World War II.

In Indonesia, New Year’s celebrations are widespread except in the city of Banda Aceh where Islamic clerics prohibit Muslims from celebrating New Year’s Eve.

Indonesian police deployed at least 92,000 policemen to safeguard the celebration across the country.

Read Next
Navy brings Christmas cheer to families of soldiers deployed away from home
EDITORS' PICK
Nograles: Cabinet members to donate 75% of monthly salary to aid COVID-19 fight
Quick chat with Nicole Andersson: ‘You really don’t need much to be happy’
IATF to LGUs: Issue ordinances vs attacks on frontliners, COVID-19 patients
Diokno to Duterte: OK to make fun of buck tooth, but focus on people’s needs first
Robredo spox thanks Duterte for defending VP’s efforts vs COVID-19
10 Filipinos positive for COVID-19 in UK, 7 in Ireland — envoy
MOST READ
Gov’t mulling quarantine period extension of 15-20 more days
Sotto on Isko Moreno’s call: We do our job without the media following our every move
ADB warns PH against prolonged lockdown
Cook more and eat less: Tips on your quarantine diet
Don't miss out on the latest news and information.