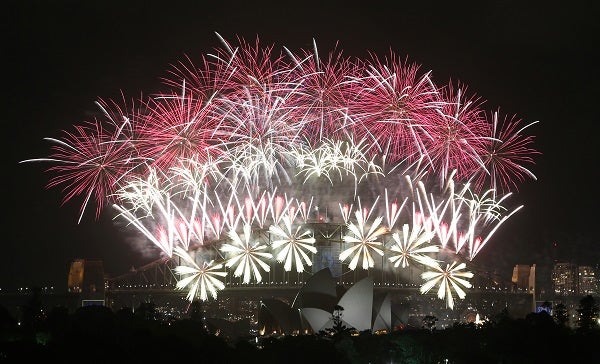 Samoa and Christmas Island in Kiribati were the first to welcome 2014. At 6 p.m. in Manila Tuesday, the two countries had already celebrated the New Year.

Samoa, a South Pacific island nation located about 8,000 kilometers southeast of Manila, used to be one of the last places in the world to celebrate the New Year, being the last spot on earth to see the sunset. But it became the first place to see the sunrise on Dec. 31, 2011, by wiping a full day, Dec. 30, 2011, off its calendar in order to align itself with its Asian trading partners.

Sydney’s iconic opera house and harbor bridge will sparkle with tons of exploding fireworks, while smog concerns have dampened such pyrotechnic displays in at least one polluted Chinese city, and Japanese temples will ring 108 times as Asia-Pacific countries become the first to usher in the New Year.

Sydney officials promised that the Australian city’s annual world-renowned pyrotechnics show would be more extravagant than ever, with more than

1.6 million revelers expected to line the harbor Tuesday for a view.

The mood will be more subdued in the Philippines, which is three hours behind Sydney, where the lives of millions of people remain disrupted by Supertyphoon “Yolanda” (international name: Haiyan).

The Nov. 8 storm killed more than 6,100 people in the Eastern Visayas, displaced at least 4 million others and left its most gruesome mark on Tacloban, a city of 240,000 that will need years to recover.

Samoa and Christmas Island were followed an hour later by New Zealand and some parts of Australia after two hours. Japan, South Korea and North Korea ushered in 2014 an hour earlier than Manila.

Hong Kong, Singapore and China were some of the places that welcomed 2014 at the same time as the Philippines. Other Asian countries like Indonesia, Thailand and Vietnam welcomed 2014 an hour later than Manila.

In Europe, countries like Germany, Spain, France and Italy will usher in 2014 on Jan. 1, 7 a.m. in Manila time while the United Kingdom, Ireland and Portugal will celebrate the New Year an hour later.

American Samoa, which is about 125 km to the east of Samoa but did not adapt the switch in timeline, will welcome 2014 at 7 p.m. Manila time, Jan. 1. Some regions of US, including Baker Island and Howland Island, will be the last places to welcome 2014 at 8 p.m. Wednesday, Manila time.

In Sydney, the fireworks will be launched from four sails of the Sydney Opera House for the first time in more than a decade.

The local council said the secret fireworks feature that will erupt on the Sydney Harbor Bridge will be twice the size of last year’s centerpiece of the show.

“We are ready to host the world’s best New Year’s Eve on the world’s most beautiful harbor,” Moore told reporters.

China was planning to count down to the New Year with light shows at two spectacular and historic locations—part of the Great Wall near Beijing and at the Bund waterfront in Shanghai.

But in one polluted Chinese city, the celebrations were slated to be quieter as authorities in Wuhan in central Hubei province, which is three hours behind Sydney, called off their annual New Year fireworks show and banned fireworks in downtown areas because of worries about making the smoggy air worse.

In Japan, which is two hours behind Sydney, thousands of visitors, some donning kimonos, will pray, ring a bell and toss coins as offerings at shrines across the nation on Tuesday night, wishing for health, wealth and happiness. Temple bells will ring the customary 108 times, for the 108 causes of suffering according to Buddhism, and welcome in the Year of the Horse.

Japanese are hopeful about the economy for the first time in years after some signs of revival under Prime Minister Shinzo Abe, whose easing lending policies and pump-priming measures have been dubbed “Abenomics.”

The Tokyo Stock Exchange closed the year at a six-year high, rising nearly 60 percent, a jump unseen in four decades, although a leading business newspaper warned in a New Year’s Eve editorial that more reforms will be needed to sustain the growth.

In Hong Kong, which is three hours behind Sydney, tens of thousands will turn out to watch the fireworks show over the famed Victoria Harbor, in the biggest-ever countdown show for the southern Chinese city. Fireworks will soar from skyscrapers and a 1-kilometer line of barges along Victoria Harbor in a “wish upon a star” tourism board show. A British colonial-era canon will be fired at midnight in another New Year tradition dating from the end of World War II.

In Indonesia, New Year celebrations are widespread except in the city of Banda Aceh where Islamic clerics prohibit Muslims from celebrating New Year’s Eve.

In the capital, Jakarta, Gov. Joko Widodo will lead a festival featuring concerts, parades, a marching band and fireworks. Revelers also celebrate by riding the streets in cars and on motorbikes honking horns.

However, in areas ravaged by Supertyphoon Yolanda in the Philippines, celebrations were muted.

In Tacloban City, which bore the brunt of the Nov. 8 storm, officials were preparing a midnight fireworks display to try to boost spirits, despite nearly 8,000 dead or missing.

In the small, ruined farming village of San Isidro, residents are still grappling with the overpowering stench of death as 1,400 corpses stacked in black body bags lay in a field, more than seven weeks after the tragedy.

While hundreds of thousands of revelers cheer, shout and yell in the new year in Times Square, hundreds of New Yorkers will gather not far away to pass the waning hours of 2013 without a word.

They’ll be quietly observing a 25-year tradition at Jivamukti Yoga, which opens its doors to people who like to spend New Year’s Eve reflecting, meditating, crafting resolutions, maybe doing a headstand, all in “Auld Lang” silence.

It’s a yearend bash with no pressure to mingle, no need to bring anything, no drunken regrets, and no small talk—or big talk, either.

“The only thing that we ask,” Jivamukti Yoga cofounder Sharon Gannon says, “is that you shut up.”

Drawing on a long history of silent meditation in yoga, the event certainly isn’t the only venue for people who are less interested in spirits than spirituality on New Year’s Eve. Many churches hold reverent services on Dec. 31; the custom holds particular resonance for many black churches, where Watch Night observances commemorate the Dec. 31, 1862, services at which congregants awaited word that the Emancipation Proclamation would take effect.

And some yoga and spiritual centers advertise multiday silent New Year events. That’s regularly the most popular retreat at Yogaville in Buckingham, Virginia, which began the New Year’s sessions about four decades ago and expected 65 people this year for more than four days of yoga, meditation, small tasks and listening to lectures, the Rev. Lakshmi Bartel said.

“People who come to Yogaville really want to live better, happier lives … and New Year’s is the perfect time” to focus on that, she said.

The New York event requires a lesser time and financial commitment—it’s free, while retreats can cost hundreds of dollars or more.—Reports from AFP and AP