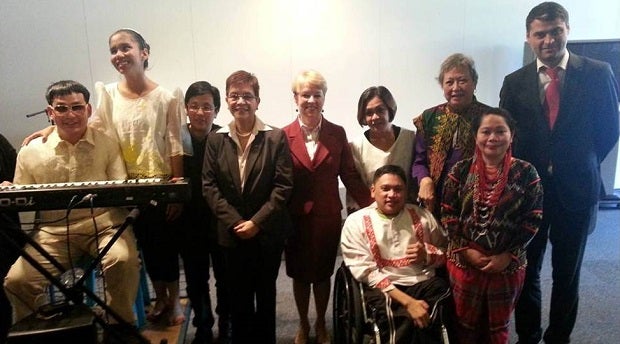 With a 30-minute performance that featured classic Filipino folk dances like the tinikling, sayaw sa bangko and maglalatik, as well as a Christmas musical number, a 10-member group of physically and mentally challenged dancers, including marginalized artists, from the Philippines, emerged as a “big hit” during the International Day of Persons with Disabilities rites held in Paris on Dec. 3.

No less than Irina Bokova, director general of the United Nations Educational, Scientific and Cultural Organization (Unesco) cited Earthsavers Dream Ensemble from the Philippines for leaving an “unforgettable impression on the audience” with their presentation at the Unesco headquarters in Place de Fontenoy Square in the French capital.

“Your presence here today is a gift,” Bokova told the artists, including 16-year-old folk dancer Maricor Book and keyboard player Rico del Rosario, both of whom are blind, and polio victim Edgardo Sison, who played the drums.

The Filipino group, she said in a citation, gave “the most vulnerable children in society a space to work through often difficult personal stories and to express their vision of the world.”

“Through their performances, they appeal to each one of us to better care for our fragile planet. They raise awareness about the wealth of our biological, creative and cultural diversity. In short, they share the dream of a single human family,” Bokova said.

The other members of the group are Raquel Arica, who is hearing-impaired and also has Down Syndrome; Edna Sanchez, deaf interpreter; Jennifer del Rosario, production assistant; Wally Tuyan, choreographer; street kid Angelbert Cruz; Edmarie Inda, a member of the Manobo indigenous group, and Susan Claudio, documentation staff and executive assistant.

Bokova said she could “not think of a more powerful message at a time when the Philippines was in the early days of recovery from the devastation wrought by Supertyphoon “Yolanda” (international name: Haiyan).

In a letter to Cecile Guidote-Alvarez, director of the Manila-based Earthsavers-

Unesco Artists for Peace, Bokova called the presence of the Philippine delegation to the festivities a “gesture to honor the victims of the devastating natural disaster.”

Bokova assured the Philippine government anew of Unesco’s “determination to play a role in the recovery efforts under way.”

“We have submitted three projects to the UN Office for the Coordination of Humanitarian Affairs’ Strategic Response Plan [for the typhoon survivors],” she said.

The package consists of “a program that aims to support the local media in its humanitarian information capacity and projects focusing on psychosocial support to secondary schools, and the rebuilding of ocean-observing systems and training in standard operating procedures,” Bokova said.

“Beyond these projects, we pledge to work with your government and other partners to stand by the Philippines in strengthening the resilience of typhoon-devastated communities in the long term,” she said.

In her remarks during the event, Bokova said “more than one billion people, almost 15 percent of the world’s population, live with some form of physical or mental disability.”

“It is estimated that one third of the world’s out-of-school children are differently abled,” she said, adding that “disability all too often equates with exclusion and reinforces stigma and prejudice.”

“It is all this that Earthsavers Dream Ensemble is cutting through. The ensemble starts with one simple premise: Every human being has the potential to create and express feelings and aspirations,” she said.

“The ensemble gives the most vulnerable children in society a space to work through often difficult personal stories and express their vision of the world,” she added.

Philippine Ambassador to France Cristina Ortega said the Filipino group was “composed of young adults who are physically and mentally challenged and those coming from disadvantaged backgrounds and indigenous communities.”

“But rather than feature the difficulties and challenges that may have been their reality, these amazing individuals are here to impart a message of hope, peace and understanding. Through the years, the ensemble has also advocated for the respect and protection of nature and the environment,” she said.

Ortega expressed hope that “the message of Earthsavers Dream Ensemble and indeed, that of countries facing the real challenge of climate change, is heard and acted on responsibly by the international community.”

According to Ortega, the Philippines “has been doing its share not only to raise awareness but also to work for the inclusion of persons with disabilities in every aspect of social life.”

Alvarez, also head of the Philippine Center of the International Theater Institute and former director of the National Commission on Culture and the Arts (NCCA), said the Earthsavers artists were “treated to a Filipino dinner by Ambassador Ortega and her staff, who said they were touched by the ensemble’s performance, which by the way, also made them feel proud to be Filipinos.”

“Not only that, the group was able to take a tour of Paris, including a visit to the Eiffel Tower, courtesy of the embassy staff,” she told the Inquirer.

The group’s travel expenses were partly funded by a grant from the NCCA, Alvarez said.

“We attended the Unesco event on a fly-now, pay-later plan. Before we left, we had a string of rejections… from various groups to our appeals for financial support. But we are confident doors may finally open and give attention to the sad plight of physically and mentally challenged, as well as marginalized, artists,” she said.

Alvarez, also founder of the Philippine Educational Theater Association, said she hoped the state-run Philippine Amusement and Gaming Corp. (Pagcor) would “reconsider its denial of the group’s appeal for help, and SM and the Metrobank Foundation, among other institutions, will finally respond to our requests for assistance.”

In Paris, “Earthsavers Dream Ensemble, with their inspiring indomitable spirit, was given a standing ovation,” she said.

“We hope their [countrymen] here [will] do the same,” she added.

Earthsavers Dream Ensemble will perform at Fort Santiago in Intramuros, Manila, at 4 p.m. on Jan. 5, 2014.