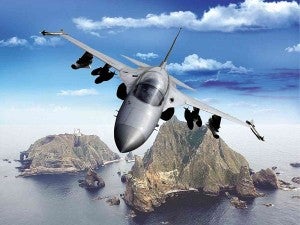 MANILA, Philippines—Defense Secretary Voltaire Gazmin on Saturday said the government expected the first of the 12 Korean FA-50 lead in fighter jets to be delivered in June 2015.

Gazmin made this statement after the defense department recommended that President Benigno Aquino III allow the payment of the 52-percent down payment for the P18.9-billion fighter jets.

“We recommended the approval of the DP (down payment) and progress billing,” he said.

Earlier, Defense Undersecretary Fernando Manalo said state agencies were only allowed by law to pay a 15-percent down payment, with the rest to be paid upon the delivery of the goods.

Anything higher than that would require the approval of the Chief Executive, Manalo said.

The Philippine government’s orders for the jets, manufactured by the government-owned Korean Aerospace Industries Inc., were among the highlights of President Aquino’s recent state visit to South Korea.

The acquisition of the FA-50s would boost the capability of the Philippine Air Force (PAF) for the country’s territorial defense.

The PAF decommissioned its F-5s, the last of the Air Force’s fighter jets, in 2005 after the government focused on internal security operations and poured most of the military’s resources on ground troops from the Philippine Army.

But the Armed Forces of the Philippines found itself having to shift to external defense as China became more aggressive in claiming territories under its so-called nine-dash-line map that includes a number of islands and shoals within the Philippines’ territory.

Stepping up the military’s modernization efforts, the Aquino administration purchased two warships, which are decommissioned US Coast Guard high-endurance cutters, for the Philippine Navy.