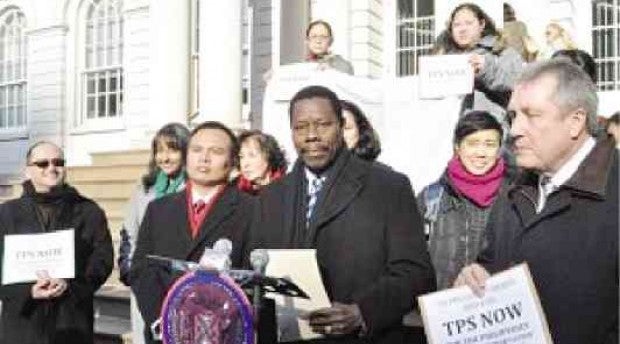 In the aftermath of Supertyphoon “Yolanda,” the Philippine government has asked the US to grant temporary protected status (TPS) to undocumented Filipinos in the United States.

To understand TPS and how it would benefit an undocumented immigrant, advocates told the story of a Visayan housekeeper working in the Upper Westside.

“Carol” has been employed for 15 years as a domestic helper. Although undocumented, she was able to save enough to give her family in Leyte a house. But Yolanda (International name: Haiyan) blew into the region and destroyed everything: the newly built house and everything the family owned. The 60-year-old Carol, who has been planning to retire in the Philippines in a couple of years, decides she needs to keep working in New York to continue to support her family, but worried that if she stayed longer her legal status might be uncovered. Immigration lawyers and advocates agree that Carol is an ideal candidate for TPS.

The ability of overseas Filipino workers, who contribute $26 billion to the Philippine economy, to stay employed is critical, said Linda Oalican of Damayan Migrant Workers Association at a press conference Dec. 19 at the City Hall steps in Lower Manhattan. “The economic burden to workers like Carol has been greatly increased by the devastation of Yolanda,” she added.

Recently, NYC council members Mathieu Eugene (D-Brooklyn) and Daniel Dromm (D-Jackson Heights/Elmhurst/Woodside, etc.) sponsored a resolution asking the Obama administration to grant the Philippine request for TPS that would prevent the deportation of undocumented Filipinos like Carol, and enable them to get employment authorization documents. TPS status is granted to countries that are in a state of war or suffering from serious

“The TPS designation would allow eligible Filipino nationals to remain in this country while the Philippines recovers from the recent devastation (of the typhoon),” said Eugene at the press conference.

Dromm said TPS legislation would assist Filipinos while their native country “goes through the painful process of recovery.”

On Dec. 16, or more than a month after the Nov. 8 supertyphoon, the Philippine government formally requested the US to designated the Philippines a TPS country so that its undocumented nationals can be  granted some form of short-term immigration relief.

Advocates like Guerrero, Oalican and members of the NYC council are urging the US to make a decision on Manila’s TPS status that would provide relief to an estimated 500K to 1 million undocumented Filipinos. An employment authorization documented granted under TPS remains valid for 18 months and may be extended.

What happens after 18 months, ask undocumented immigrants interviewed by The FilAm. Will the work permit expire and expose them as “illegals” before their employers?

“There is no risk in applying for TPS,” Eugene explained to The FilAm. He said a work permit can be continuously extended while the country undergoes a process of reconstruction.

A Haitian American, Eugene said such has been the experience of Haitian immigrants when a devastating 2010 earthquake that hit the country and killed an estimated 200,000 people. The US promptly designated TPS status on Haiti.

In the Philippines, more than 6,000 people have been reported dead from the typhoon, and officials are anticipating rebuilding could take several years.

“That’s what happened to Haitians,” said Eugene. “Those who got EADS (Employment Authorization Documents) just kept renewing and renewing and some may still be renewing until now.”

Advocates stress that TPS status will protect an immigrant from deportation and enable that individual to find employment. There are rules, and a lawyer will, from the beginning, tell the immigrant if he is eligible for TPS or not.

The Task Force Haiyan and the St. Francis of Assisi Migrant Center will be holding clinics to educate potential applicants about the TPS and address their concerns, said Father Julian Jagudilla.

“Our tradition in New York is when one is in need, we all come together to support,” said Eugene. “They did it for my country; they’ll do it for the Philippines.” The FilAm