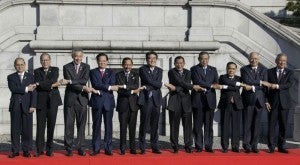 In the Manila Declaration issued at the close of the recent 8th Conference of Asean-China People-to-People Friendship Organizations, the associations also committed themselves to “achieving progress and unity in diversity,” which was the theme of the meeting.

The conference, hosted by the Association for Philippine-China Understanding (APCU), was attended by friendship organizations of the nine other member countries of the Asean—Brunei, Cambodia, Indonesia, Laos, Malaysia, Myanmar, Singapore, Thailand and Vietnam.

The delegates said mutual exchanges and cooperation should focus mainly on “the five pillars of education, sports, tourism, health and economy,” as specified in the 2006 Declaration on Asean-China People-to-People Friendship and Cooperation signed in Beijing, the Chinese capital.

The new declaration specified the following points that the partners should consider in promoting their goal to achieve progress and unity in diversity:

2. Understand and accept their cultural differences;

4. Encourage and promote exchanges and cooperation around the five pillars.

Keynote speaker Lilia de Lima, director general of the Philippine Economic Zone Authority, bolstered the theme of cooperation and understanding by underscoring the centuries-old ties between China and Asean. She pointed out that in the Philippines, many had Chinese or Chinese-sounding surnames because of their ancestry.

She said that in the past decade, China was Asean’s biggest trading partner and Southeast Asia was China’s third. “Over the same period, people-to-people exchanges also increased,” she added.

The relationship was expected to become stronger with the 2015 integration of Asean into one economic region, De Lima said.

De Lima also made a pitch for the Philippines as an investment target, saying President Aquino’s anticorruption campaign and “daang matuwid” (straight path) program have started to bear fruit.

She said investments and trade exchanges would strengthen relationships. Urging “coop-etition,” De Lima said partners “could compete in the same areas but also collaborate… More cooperation could [usher in] a golden century for Asia.”

Through the foreign delegates, she thanked their countries for extending help to victims of Supertyphoon “Yolanda.”

In their brief remarks, all heads of delegations of the 10 Asean friendship organizations expressed their hope that people-to-people initiatives would strengthen ties between China and the region. Thai Korn Dabbaransi said such activities should be used to “strengthen peaceful harmony” between the partners while APCU president Josie Joya Baldovino said the friendship organizations should be vehicles “to understand and cooperate with one another to overcome difficulties and to achieve peace.”