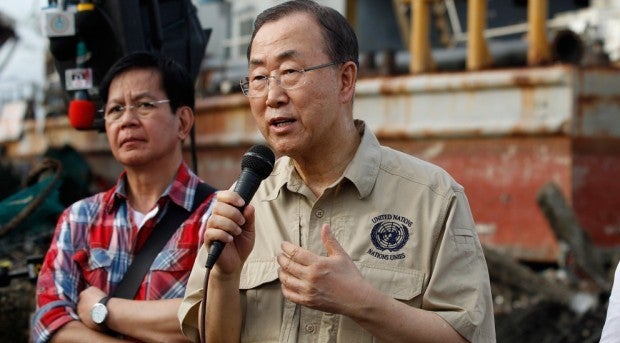 United Nations Secretary General Ban Ki-moon on Saturday pledged to rally global support for victims of Supertyphoon “Yolanda” to help them recover from one of the Philippines’ deadliest disasters.

“Never despair. The UN is behind you. The world is behind you,” the UN chief said during a visit to the devastated Tacloban City.

Wearing a baseball cap, a khaki shirt and rubber shoes, the 69-year-old South Korean walked through a narrow, debris-strewn street in Fatima, a coastal district in the city of 220,000 people where tsunami-like storm surges wrought by Yolanda (international name: Haiyan) on Nov. 8 obliterated entire communities.

A ship that plowed through the area after being hurled by huge waves lay stranded nearby, six weeks after the deluge.

Ban also visited a Tacloban tent school, put up by the UN Children’s Fund (Unicef), where pupils sang “Jingle Bells” for him. He joined them in clapping and swaying to the music.

“Please hold on,” he told the children. “We have come to help you.”

He handed out backpacks to almost 200 elementary schoolchildren there.

More than 200 heavily armed police provided security from the airport to the school. Ban’s flight was delayed because of poor visibility and overcast skies.

Along the road, the UN chief passed by scenes of devastation—fallen trees, upturned vehicles, shattered houses and mounds of debris.

Tents provided by the UN High Commissioner for Refugees (UNHCR) have replaced some houses that were swept away by the storm surge in the area.

Ban stopped briefly to inspect a temporary model house made of wood.

The typhoon, one of the strongest to hit land, left 6,102 people dead and 1,779 others missing, according to a government tally.

Ravaging an area the size of Portugal, Yolanda inflicted $12.9 billion in damage and left 4.4 million people homeless. The Philippine government said it would need $8.17 billion over four years in a massive rebuilding effort. 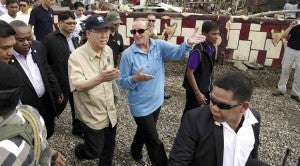 Ban’s visit follows a UN appeal early this week for $791 million for critical food assistance, clean water and shelter for typhoon victims over the next 12 months. A UN statement said about 30 percent, or $237 million, had already been raised.

Ban told reporters he was “very impressed” with the residents’ efforts to get back on their feet.

“The people of Tacloban are a very resilient people and are returning to their normal lives,” he added.

Ban arrived in Manila late Friday for a three-day visit and called on the President earlier Saturday before flying to Tacloban.

“The President also thanked Mr. Ban for the visit, for showing concern for our people,” she added.

The UN delegation visited the heavily damaged Manlurip Elementary School, some 3 kilometers from DZR Airport, where Ban distributed school kits to 20 of some 100 schoolchildren there.

Ban then motored to Barangay 75 where he delivered his brief message and condoled with some of the survivors gathered on the street just a few meters from the dredging vessel.

The coastal village was severely devastated when the dredger, owned by the Department of Public Works and Highways, was blown from the port area to this shantytown, destroying houses and killing residents.

Saying the devastation was “beyond words,” Ban offered that Yolanda was a “manmade disaster” brought on by climate change and, thus, the solution must also be found by man.

He said the United Nations would work closely with the Philippine government in mitigating the impact of natural disasters.

He said the UN would also ensure that food, shelter and safe water would be provided to Yolanda’s survivors in coordination with the Philippine government.

“The people are returning back to normal life,” Ban noted. “People are working hard.”

Lacson said the presence of Ban in Tacloban was a testament to the UN commitment to help the country. The visit “emphasizes the concern of the United Nations and other international bodies for all the people in all devastated areas,” he said in an interview.

Barangay 75 resident Joel Bonita, 41, said he was honored that his village was visited by the UN chief.

“I hope this will hasten the delivery of assistance,” said Bonita, who has lost his home. Bonita, his wife Jennifer, 39, and their three children have taken shelter at the nearby Tacloban Astrodome along with thousands of other survivors. With reports from AFP and AP

Read Next
US ambassador greets Filipinos ‘Maligayang Pasko’
EDITORS' PICK
Omicron variant detected in more countries as scientists race to find answers
Gov’t plans to open COVID-19 vaccination for 5- to 11-yr-olds by January 2022
A delightful blessing!
Villar Group gears up for AllValue Shopping Party on Dec. 3; around P 1-million promos and discounts up for grabs
Legarda: Ending Violence Against Women, a cause for all
Gov’t eyeing COVID-19 vaccine booster for essential workers, indigents by Dec. 10
MOST READ
Quiboloy warns of ‘much worse than Omicron virus’ if his ‘persecution’ is not stopped
Suspected Omicron cases mild, says leading S. Africa doctor
Bongbong Marcos’ conviction in tax case not a crime involving moral turpitude — lawyer
Marcoleta defends pol ads on ABS-CBN
Don't miss out on the latest news and information.