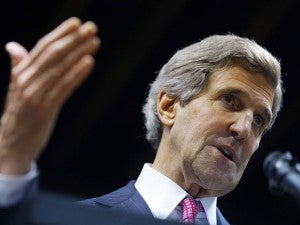 TACLOBAN—US Secretary of State John Kerry visited the typhoon-devastated central Philippine city of Tacloban on Wednesday, expressing shock at the death and destruction and vowing that Washington will not abandon its key ally.

“This is a devastation unlike anything that I have ever seen at this scale,” Kerry told reporters as he toured a temporary US aid supply depot for survivors of Supertyphoon Yolanda (international name: Haiyan).

“It really is quite stunning. It looks like a war zone in every respect and for a lot of people it is,” he said.

“You have to see this to really believe it, and to feel it and understand it.”

Tacloban, a city of 220,000 people, bore the brunt of Haiyan’s fury last month as towering tsunami-like waves whipped up by the storm crashed into many of its coastal districts.

Nearly 8,000 people were killed or remain missing, with Tacloban accounting for more than 5,000 of the total.

The United States, a long-time military ally of the Philippines, mounted a massive humanitarian response, deploying millions of dollars’ worth of aid.

It also sent an aircraft carrier group and committed 1,000 Marines to help in the immediate rehabilitation effort.

Kerry said the United States would remain unwavering in its efforts to assist the Philippines, which Washington considers a key military ally in the region.

“On behalf of President [Barack] Obama and the American people, it’s my privilege to come here to offer our condolences,” he said.

“Last month’s typhoon broke the world’s heart, but what is certain is that it didn’t break the spirit of the people here,” he stressed.

Read Next
US sending additional $25M for ‘Yolanda’ aid – Kerry
EDITORS' PICK
DOH: Too early to say COVID-19 cases are declining
Duterte praises military but slams police for poor discipline, corruption
Acer starts the year off strong with the Aspire Vero National Geographic Edition
The best of bayside and city living at SMDC’s Sail Residences
COVID-19 cases surging in all regions and provinces, says DOH
Over 3 Million worth of prizes to be won at Smart Padala’s SENDali Manalo Promo!
MOST READ
Marcos Jr. visits Cebu, stands as ‘ninong’ to mayor’s son
Duterte praises military but slams police for poor discipline, corruption
Djokovic has to comply with rules to go to Spain, PM says
Comelec junks petition to scrap Bongbong Marcos COC
Don't miss out on the latest news and information.