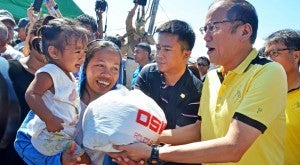 A survivor of “Yolanda” breaks into a smile of relief as she welcomes a care package from President Aquino at the Palo municipal hall in Leyte province. The President visited areas devastated by the supertyphoon a week ago to reassure victims of government support. FILE PHOTO

TOKYO — An optimistic President Aquino declared on Thursday, that the country would be able to rise from the human and economic tragedy wrought by Supertyphoon “Yolanda” (Haiyan), which flattened central Philippines in November, and other calamities that struck the country this year.

“As always, we will show to the world our ability to unite and rise during trying times. As a responsible member of the community of nations, we’ll continue to be part of the pursuit of our collective goal: to bring about a world where every individual and every nation has respect and concern for each other,” said the President.

Amid political bickering over relief and recovery efforts and the overwhelming task ahead for reconstruction, the President vowed to lead efforts in rebuilding hardest-hit provinces in Eastern Visayas and the rest of Visayas even as he called for national unity.

Aquino issued this statement before leaving Manila early morning on Thursday for Tokyo, where he would join fellow heads of state and government of the Association of Southeast Asian Nations (Asean) for a summit meeting with Japan.

He was expected to deliver the same optimistic message during his meeting with the Filipino community (Fil-Com) in Japan to be held at the National Olympics Memorial Youth Center at Shibuya-ku, Tokyo.

The meeting with the Filipino community was first on his agenda for the three-day trip.

In his departure statement, the President said he would assure the 203,000-strong Fil-Com in Japan that the Philippines would push for early recovery for areas hit by disasters.

“One of our special objectives in coming to Japan is to meet with our countrymen. We all know that they have worries (over their families in the Philippines who have been affected by) past calamities. Thus, we will assure them of government’s resolve to speed up the rehabilitation and rebuilding of communities momentarily brought down by tragedies,” he said.

Aquino said it was his “duty” to attend regional summits.

He said he would have a chance to personally thank Japan for its help in relief and recovery efforts following the onslaught of Supertyphoon “Yolanda” in November and other disasters that struck other parts of the Philippines in 2013.

At the Fil-Com gathering, the President would receive a symbolic check of Y1 million yen (about P500,000) for victims of Yolanda from Jenavila Shigemizu, the chair of the Philippine Barrio Fiesta Executive Committee, and Olive Akasu.

He also conferred on Dr. Ambeth Ocampo, a historian, academician, writer and Philippine Daily Inquirer columnist, the Presidential Medal of Merit for his work as former chair of the National Historical for Culture and the Arts, among other contributions to preserving the country’s rich history.

The President is in Japan primarily for the “40th Asean-Japan Commemorative Summit,” an all-important regional summit that will allow heads of state and governments in the Asean region to discuss with Japan simmering tensions brought about by their separate border disputes with China in the West Philippine Sea, East Sea and Yellow Sea.

The summit is a culminating event to a full year of activities commemorating 40 years of Asean-Japan relations.

During the three-day visit of the President, he will have a series of meetings with Japanese political and business leaders to fortify the Philippines’ defense and trade cooperation with Japan.

The expenses covered transportation, accommodation, food and equipment, among other requirements, of the President and his 57-member official delegation, said Ochoa.

“The participation of President Aquino in the Asean-Japan Commemorative Summit will further strengthen our relationship with Japan, a long-time ally and strategic partner in trade, tourism and labor,” Ochoa added.

Philippine Ambassador to Japan Manuel Lopez said Mr. Aquino’s visit to Japan would be an opportunity for him to thank the Japanese people and its government for the help they extended to Filipinos affected by recent calamities.

The President will particularly have the chance to thank Emperor Akihito and Prime Minister Shinzo Abe when he meets with them on Friday.

Japan was among the most generous members of the international community that have extended aid to survivors of Yolanda, which flattened central Visayas on Nov. 8, leaving 5,924 people dead and 1,779 missing.

Lopez said Japanese Foreign Minister Fumio Kishida had told him to just let Japan know if the Philippines needed anything in terms of assistance.

The President said it was his “duty” to attend the Asean-Japan summit as the leader of an Asean member and as one of the closest allies of Japan.

He said he would also express the nation’s gratitude to Japan and other Asean members who extended help for Yolanda victims.

“Truly, during a difficult time, they made us feel that we’re not alone.  This is the dividend of our honorable and robust dealings and relations with our allies and friends,” said Aquino.

He recalled that before Yolanda struck, personnel of the Asean Center for Humanitarian Assistance had been deployed to the country immediately rescue and care for typhoon victims.

Besides the millions of aid for typhoon victims, Japan also sent aircraft, ships, medical teams and members of its Self-Defense Forces “to hasten the delivery of relief goods to the typhoon survivors,” said the President.

During the three-day visit, the President will also engage in political, defense and business talks with Japanese leaders led by Prime Minister Shinzo Abe.

Aquino will promote Philippine economic interests in Japan through these scheduled meetings.

The President will witness the signing of three exchanges of notes on a post-disaster standby loan worth ¥10billion ($100 million), loan for multi-role response Vessels for the Philippine Coast Guard worth ¥18.732 billion ($187 million), and a revised route schedule for the Philippines-Japan Air Services Agreement to increase air traffic between two nations.

While in Tokyo, he would meet with Abe, Emperor Akihito and Empres Michiko, top business leaders and the Filipino community.

“Besides its generosity in times of calamities, Japan has been a strong partner in improving our economy and laying out of opportunities for all Filipinos,” he said.

Japan is the country’s top trade partner besides the source of the biggest Official Development Assistance, he said.

“So we would take advantage of this opportunity to talk with Prime Minister Shinzo Abe so that we could thank his countrymen,” he said.

The President disclosed that the bilateral meeting would also touch on strengthening relations for lasting peace and order, and prosperity for the region.

“In our discussions with Japanese businessmen, we will proudly lay out before them many opportunities for businesses expansion in our country,” he said.

The President will have a private dinner Thursday with the influential Ishihara family led by ex-Tokyo Governor Shintaro and current Congressman Hirotaka, vice minister for foreign affairs.

Abe, apparently pleased with the President’s presence in Tokyo, will host a “working lunch” with Mr. Aquino on Friday.

“The President and Prime Minister Shinzo Abe will meet to discuss among others the recovery and reconstruction program of the government post-Typhoon Yolanda, Maritime Cooperation, the Mindanao peace process and people-to-people exchanges,” said Coloma in an earlier interview.

The President is also slated to meet with officials of Nippon Keidanren, Nidec Sankyo, Sumitomo Metal Mining Company and Sumitomo Mitsui Banking Corp., Bank of Japan and the Japanese Chamber of Commerce.

He will also meet on Friday with the chancellor and president of Sophia University, which will confer on him the honorary doctorate in law, and members of the Japan Philippines Parliamentarians Friendship League.

The sessions of the summit will not begin until Saturday, but the President will join Asean heads of state and government at a dinner on Friday to be hosted by Abe and his wife Akie at the prime minister’s official residence.