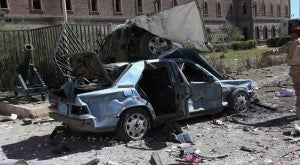 MANILA, Philippines – The president of Yemen declared as martyrs the seven Filipino medical workers and other victims of the recent bombing and shooting attack in its defense ministry complex.

A total of 52 people were killed when suicide bombers attacked the complex of the defense ministry in Yemen’s capital city of Sana’a last December 5. A group of armed men came and opened fire at the complex after the bombing attack.

A hospital within the compound partially collapsed due to the blast. Seven Filipino medical workers, including one doctor, were killed while 11 others suffered injuries.

Yemen has since been placed under crisis alert level three, banning deployment of overseas Filipino workers (OFWs) there and implementing voluntary repatriation.

“Minister Al-Qirbi vowed full assistance to facilitate the early repatriation of the remains of the victims and cited the contributions of Filipino medical workers to the Yemeni people,” DFA said.

“Yemeni Minister of Interior, Major General Dr. Abdel Qader Qahtan … conveyed his condolences to the families of the victims and condemned the attack on the hospital,” it said.

“I condemn the bombing in the Yemeni capital of Sana’a. It was a senseless act that has no place in the modern world,” Binay said.

“I hope the Yemeni government will make sure that the families of the bombing casualties are extended all possible assistance they will be needing, particularly in the recovery and repatriation of the victims,” he said.

There are around 1,000 OFWs working in Yemen.