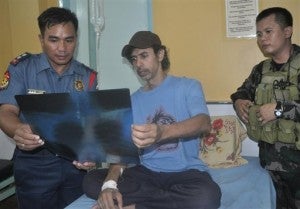 MANILA, Philippines—Jordanian journalist Baker Atyani talked to the media on arriving in Manila on Friday but begged off from recounting the details of his 18-month abduction by Islamist militants. He is returning to Jordan today.

“I’ll be focusing more on the future rather than the past,” Atyani told reporters who had waited for him at Philippine National Police headquarters in Camp Crame.

“I am meeting soon my loved ones and my feelings and emotions…I can’t really explain them well. I am sure you understand that,” he said.

“And I really want to thank all of you who stood by me during this crisis. You, my colleagues in media and friends, those who gave a lot of support in the social network, maraming salamat,” he said.

Gumban said Atyani gave a very short message because they had all wanted the debriefing at Camp Crame to immediately begin so that the journalist could return to Jordan today.

“He wants to return to his wife and four sons,” Gumban said.

Gumban said that Atyani, who used to weigh 76 kilograms, had lost 16 kilograms throughout his captivity, eating mostly rice and fish. The shirt he wore on Friday night was the same one he had on when he arrived in Manila last year to do a story on the Abu Sayyaf.

The shirt used to be tight around his torso, now it hung loosely from his shoulders.

Atyani told Gumban he crossed a high mountain and two other smaller ones to escape from the Islamic extremists in Sulu who held him captive for a year and a half.

He was found by local police on Thursday walking down a mountain road in Patikul.

The journalist, well known for having interviewed the late Al-Qaida leader Osama bin Laden shortly before the 9-11 attacks on New York and Washington, had gone to Sulu last year to do a documentary on the Abu Sayyaf. He and his two Filipino cameramen were abducted on June 12, 2012. The two Filipinos were released last February, reportedly on the intercession of Moro National Libertion Front commander Habier Malik.

Philippine government officials often said they did not believe Atyani was being held captive and there seemed to be little effort to search for him. With reports from Julie Alipala, Inquirer Mindanao

Atyani glad to be back, looks forward to family reunion