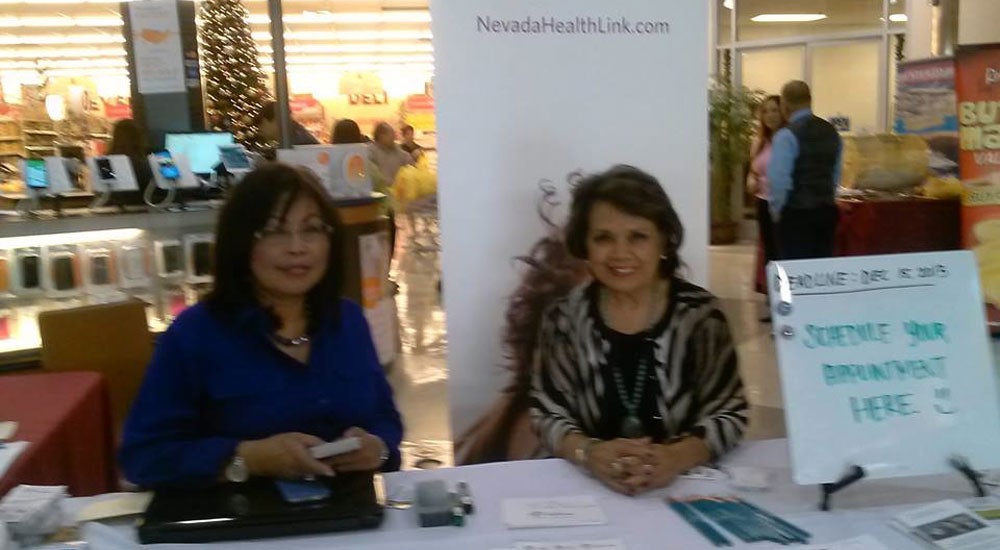 Rozita Lee and Emma Williams, both fluent in Filipino, staff table to sign up Fil-Ams for Obamacare. PHOTO BY BERT ELJERA

LAS VEGAS—Since quitting her job as a nurse in San Francisco five years ago, Christine Gregorio has been without healthcare insurance. She does not have health issues, but at 56 years of age, she worries that ailments that come with growing old would set in sooner or later.

But the Affordable Care Act—known by its more popular and controversial monicker Obamacare—offers her hope.

Gregorio is among a growing number of Filipino-Americans, the largest Asian ethnic

group in Nevada, who are signing up for the ACA.

On a recent Saturday, she went to Seafood City, a grocery story that specializes in Filipino foodstuffs on Parkway Avenue here, and stopped by a booth manned by two Filipino-Americans to start the tedious and time-consuming process of signing up for Obamacare.

The booth was actually set up by Nevada Health Link, a state exchange created in accordance with the ACA and an expansion of the Medicaid program in Nevada.

Nevada Gov. Brian Sandoval is one of a few Republican governors to agree to expanding Medicaid and creating a state exchange that both help Nevada residents find affordable health insurance. It also provides information about tax credits and subsidies to help cover the cost of health insurance.

“Part of what we do is educate people about the healthcare law,” said Rozita Lee, a well-known leader of the Filipino-American community here.

“Even though it’s been in the media for quite a while now, still people are wanting to know more about the details—if they qualify and how much it will cost them.”

The information and signing booths supplement the online marketplace that people can go to purchase state-approved insurance plans, based on income, or to simply browse on what is available.

Lee and Emma Williams, the Asian-American “enrollment facilitators” for Las Vegas, were actually hired by the Latin Chamber of Commerce, which has the contract with Nevada Health Link.

They are responsible for the Asian-American community, of which Filipino-Americans are the largest. They are both fluent in Tagalog.

The NevadaHealthLink.com is separate from the problem-plagued federal website HealthCare.gov, which also is available for those who want to sign up by that route.

Lee said the federal website problems have affected people’s perception and enthusiasm for signing up, but many of them, particularly the elderly, “are not computer-savvy anyway, and they like that face-to-face interaction.”

Williams, the other Filipino-American woman manning the booth, said signing up can be a long, tedious process, lasting from one hour to an hour and a half.

“First step is to set up an appointment,” Williams said. “We ask them to bring Nevada ID or driver’s license, Social Security card, green card and proof of income, such as Internal Revenue Tax return.”

Oftentimes, they come back for the appointment with incomplete documents or they don’t have sufficient employment history, thus delaying the process, or making them not qualified at all, she said.

Most of those who come to the booths are folks in their 50s and 60s, brought by their adult children, and have no insurance. They are too young to qualify for Medicare, whose eligibility age begins at 65. Those on Medicare no longer need to sign up for Obamacare.

Lee and Williams said they are a little disappointed about the number of people signing up, and they plan to do more outreach to community groups and churches, but both expect the pace to quicken as the Dec. 15 deadline approaches for the health insurance plans to take effect on Jan.1.

The deadline to sign up for Obamacare is March 15, although there is a clamor for president Obama to extend that deadline because of the glitches to the HeathCare.org website.

People without health insurance by 2014 may be subject to a fine, according to the ACA law.

Sandoval drew flak from his fellow Republicans for acceding to the expansion of Medicaid in Nevada, but the popular governor went ahead anyway, saying that his priority was to provide health insurance to an estimated 600,000 uninsured Nevadans.

According to the Governor’s Office, the goal was to insure about 20,000 through Nevada Health Link. As of November, total enrolled: 513; number of applicants that have selected plans: 1,997; total applications in process: 32,848; total people in applications process: 55,842.

Nevada is one of a growing number of states that are having success, despite the glitches that came with the Obamacare rollout.

The Los Angeles Times reported on Tuesday, Nov. 19, that a number of states that use

their own systems, including California, are on track to hit enrollment targets for 2014 because of a sharp increase in November, according to state officials.

Several other states, including Connecticut and Kentucky, are outpacing their enrollment estimates, even as states that depend on the federal website lag far behind. In Minnesota, enrollment in the second half of October ran at triple the rate of the first half, officials

According to the 2010 census, there are 30,000Filipino-Americans in Las Vegas, although community leaders say there could be as many as 100,000.

There are about 98,000 Filipino-Americans in Nevada, the 2010 census also says, the largest Asian-American ethnic group in the state, and now a popular target for politicians.

But for Gregorio, the thing is to have that all-important healthcare coverage.

“That will give more confidence to face the future,” she said.