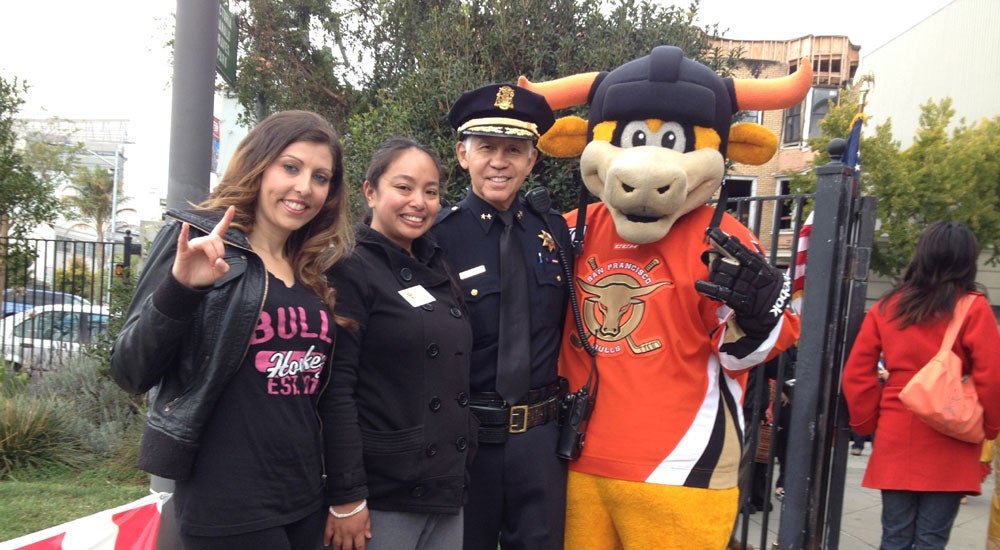 Local celebrities, pageant winners and other community leaders were present, along with Don Pastor, the first Filipino NASCAR racer.

Divina Videna, a full-blooded Filipina born and raised in San Francisco, is an account executive for the Bulls, playing a major role in ticket sales. Besides selling tickets, she has been given the opportunity to introduce the Bulls to Filipinos throughout neighboring cities.

“The Filipino Heritage Celebration game against Ontario Reign was an event that was marketed as both a fun, family-friendly, cultural celebration and an exciting display of local ethnic spirit,” Videna explained.

She admits, however, that growing up, she only had a minimal interest in hockey.  Videna never thought that she would stumble into a new career when she attended a game that shortly piqued her interest. She was not interested in applying for the job at first.

“I attended my first game on a Sunday and had more fun than I expected.  Immediately after that initial experience of an SF Bulls game, I knew that I wanted to apply for the position,” Videna recalled.

A sports fanatic, Videna always enjoyed going to Filipino heritage games in other sports. The Bulls she saw needed to earn a following among Filipino-Americans.

Filipino residents in Daly City constitute 35 percent of its population, and the SF Bulls is their only professional sports team. In addition, the Bulls are a proud ECHL affiliate of the NHL San Jose Sharks.

But even before Videna official signed on to work for the SF Bulls in June 2013, she already had the idea of introducing the Filipino community to the sport of hockey.

She vividly remembers on May 21, 2013, when she sent her “Big Picture” idea to the Bulls, specifically the manager and director. She had a plan for a heritage game event and only needed approval to kick-start her project.

“People in the Bay Area are still getting to know who the Bulls are. For Season 2 (October 2013–April 2014), having the Filipino Heritage game in the beginning of the season has awakened the community and drawn more Filipinos on game days.”

Whem Typhoon Haiyan (Yolanda) hit the Philippines, the team held a raffle fund-raiser, for the Red Cross, donating signed Bulls jerseys. It was also in gratitude of the Filipino support they have received

“Filipinos can take the experience of being a part of San Francisco hockey and get introduced to a new option for entertainment,” said Videna.

Videna hopes to hold another heritage game in spring, after an enthusiastic response to her first.  Her eventual goal is to make the Filipino Heritage Celebration an annual event.  Videna thinks that the Bulls will become a more visible and nationally known team with the Filipino community on their side.

Read Next
Kuwaiti woman gets death sentence for murdering Filipino maid
EDITORS' PICK
Acer starts the year off strong with the Aspire Vero National Geographic Edition
Gear up and get ready to play with Yamaha Mio Gear
Over 3 Million worth of prizes to be won at Smart Padala’s SENDali Manalo Promo!
If elected VP, Sara Duterte will push for mandatory military service for all Filipinos
Marcos-era elections: Not what his son signed up for
Senate bill seeks to penalize employers requiring employees to work during rest hours
MOST READ
‘Sampal sa gobyerno:’ Drilon wants unvaxxed PAO chief barred from working
Bongbong-Sara tandem names 7 candidates in initial senatorial slate
Vice mayor slams Vico Sotto for turning Pasig into a ‘puro palabas’ city
Troy Montero, Aubrey Miles and kids in isolation after testing positive for COVID-19
Don't miss out on the latest news and information.