Slow down migration of evacuees to other places, gov’t urged 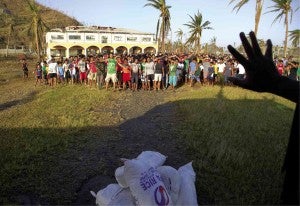 MANILA, Philippines—The government should slow down the exodus of evacuees from typhoon-devastated areas and instead strengthen the capabilities of the victims to resurrect their broken lives in their own hometowns.

“Let us all initiate ‘positive exodus’among survivors. We should all help the victims overcome helplessness and dependency for them to return to their place and rebuild their lives,” activist priest Robert Reyes said on the phone on Saturday.

The priest said the relocation of typhoon victims from their roots would create more problems that the government has yet to foresee.

“Some of the evacuees in Metro Manila might not return. They would form part of the overpopulated metropolis whose citizens are in constant struggle for limited space, job opportunities and daily survival,” Reyes said.

The number of displaced people who have sought refuge in Manila and Cebu province has not reached “an alarming level,” said Undersecretary Eduardo del Rosario of the National Disaster Risk Reduction and Management Council.

“There are between 4,000 and 5,000 survivors who have arrived in Manila but a number of them also proceed to their relatives in central Luzon and southern Luzon. It’s not really a problem for Manila at the moment. If the numbers rise, then government will address that,” he said.

The exodus of survivors to various parts of the country, including Davao City, where they do not have relatives, would pose another challenge to the government, particularly on the need to address the growing problem of  informal settlers, a government official in southern Mindanao said on Friday.

Priscilla Razon, regional director of the Department of Social Welfare and Development, said the immediate challenges that the exodus pose would be providing them livelihood, shelter and education.

“These families with no relatives and who are jobless could add up to the existing number of informal settlers, and their children would also be an addition to our street children,” Razon said.

In Davao City, over a hundred Yolanda-affected families had arrived the past few days. They include the 67 families that Mayor Rodrigo Duterte had ordered fetched by members of the Central 911 team that he sent to Tacloban City.

Duterte has assured those relocating to the city of assistance. The city government even set up a help desk at the city council building for Yolanda survivors.

Juan Antonio A. Perez III, executive director of the Population Commission, said the out-migration of survivors from Yolanda-stricken areas would be “added pressure on  the local government units” of the areas they were heading to.

He said the pressure would be on transport, education, livelihood and others areas. “All of these will have  ressure on the government,” Perez said.

He said he was confident that the problem posed by the exodus of Yolanda survivors would be temporary because they would eventually go back to their former homes.

This was why the government should hasten the efforts to rebuild and rehabilitate the affected areas, he said.

“[The rebuilding and rehabilitation of affected areas] should be done carefully so as not to have a repeat of the catastrophe,” Perez said.

With a report from Nikko Dizon

NPA extends ceasefire in areas devastated by ‘Yolanda’ for 1 month

Read Next
Anderson Cooper’s accuracy was not the issue
EDITORS' PICK
Nograles: Cabinet members to donate 75% of monthly salary to aid COVID-19 fight
Quick chat with Nicole Andersson: ‘You really don’t need much to be happy’
IATF to LGUs: Issue ordinances vs attacks on frontliners, COVID-19 patients
Diokno to Duterte: OK to make fun of buck tooth, but focus on people’s needs first
Robredo spox thanks Duterte for defending VP’s efforts vs COVID-19
10 Filipinos positive for COVID-19 in UK, 7 in Ireland — envoy
MOST READ
Sotto on Isko Moreno’s call: We do our job without the media following our every move
ADB warns PH against prolonged lockdown
6 PH hospitals to receive FDA-approved test kits from UP
Duterte fires PACC’s Luna for urging NBI to probe Robredo
Don't miss out on the latest news and information.