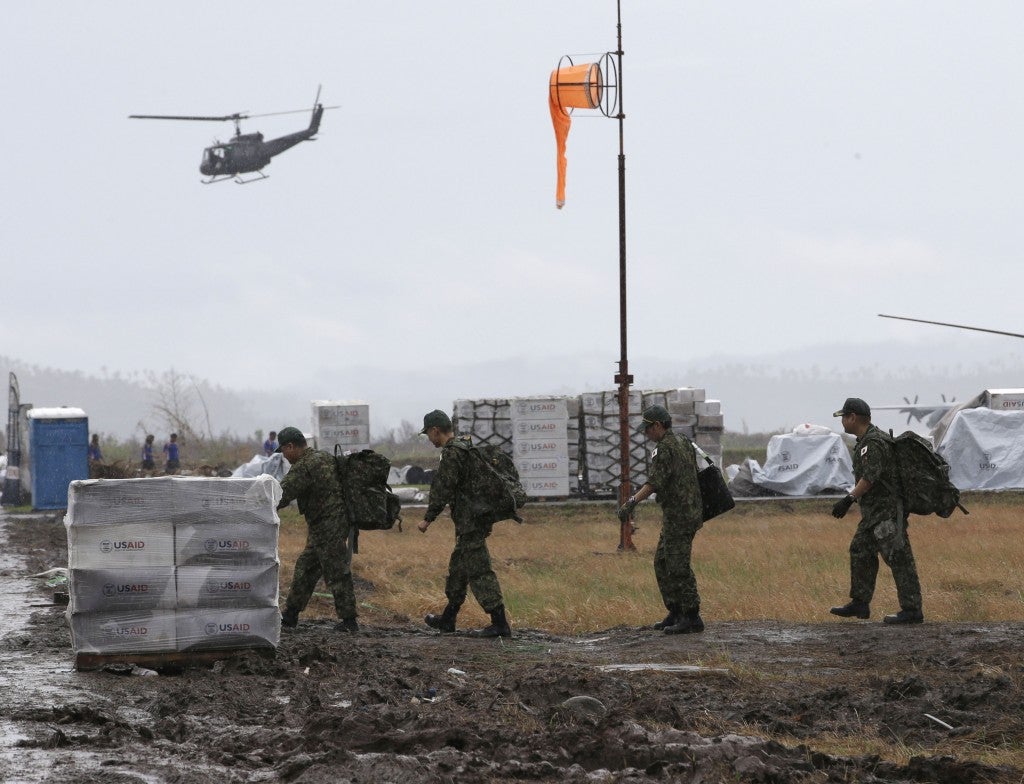 Japanese Self Defense Force personnel arrive to coordinate relief efforts on Saturday, Nov. 23, 2013 at Tacloban City. World leaders, including Prime Minister Shinzo Abe of Japan, have offered to help in the reconstruction of communities in the central Philippines destroyed by Supertyphoon “Yolanda” (international name: “Haiyan”), Malacañang said on Saturday. AP

World leaders have offered to help in the reconstruction of communities in the central Philippines destroyed by Supertyphoon “Yolanda” (international name: “Haiyan”), Malacañang said on Saturday.

She said Aquino had also talked with Jim Yong Kim, president of the World Bank, which has nearly doubled the amount of aid the Philippines can tap for the reconstruction effort.

“All of them (world leaders) always end (the call) by saying that if there’s anything else we can do to help you, just say the word, we will be happy to (help),” Valte said in a radio interview.

She said Aquino was “very thankful for all the expressions of solidarity by our neighbors.”

She said a group from the World Bank was helping Filipino officials put together a rehabilitation plan.

In a statement issued on Saturday, the World Bank said it had offered $480 million in additional financial assistance to help in the rehabilitation of communities ravaged by Yolanda.

The amount is in addition to a $500-million credit line that the World Bank has made available to the Philippines, bringing the lender’s package for disaster relief to nearly $1 billion.

“We have been encouraged by the resilience of the Filipino people and the determination shown by President Aquino and his team as they work to recover from a disaster of unprecedented scale,” Kim said.

“With overwhelming demands, the relief, recovery and reconstruction effort will take time. The World Bank Group is committed to supporting the (Philippine) government’s efforts to rebuild people’s lives no matter how long it takes,” he said.

The World Bank said the additional financial assistance was discussed by Kim in a phone call to President Aquino last week.

The additional assistance will fund the National Community Driven Development Project (NCDDP), which can be used for emergency response.

During their phone call, Kim told Aquino that the $480-million concessional loan could be delivered in a “few weeks.”

Kim said he mobilized the World Bank’s staff to facilitate quick delivery of the $500-million emergency budget support, with teams working around the clock, due to the urgency of the situation in the Philippines.

The World Bank has disaster specialists in Manila working with government officials to assess the damage and identify areas where reconstruction should be given priority.

Earlier, Aquino said he could tap the savings from the national budget for 2013, amounting to roughly P16 billion, for the recovery and rehabilitation of communities ravaged by Yolanda.

On Saturday, Communications Secretary Herminio Coloma said the cost of reconstruction would likely “exceed that figure,” necessitating accepting a loan from the World Bank.

On Friday, the United Nations also raised its appeal for aid for the typhoon victims to $348 million (P15 billion) from $47 million (P2 billion) to sustain extensive operations in Eastern Visayas and reach inland communities that have not yet received help more than two weeks after the storm hit.

UN Undersecretary General Valerie Amos, the world body’s humanitarian chief, made the announcement at UN headquarters in New York after seeing for herself the situation in hardest-hit areas of the Visayas, including Tacloban City, where she traveled twice.

“A massive disaster like this requires a massive response,” Amos said.

“Much more needs to be done. Food, clean water and shelter remain the top priorities. Vast numbers of vulnerable people are still exposed to bad weather and need basic shelter. Families who have lost their homes will need substantial long-term support from the international community to ensure they have the means to rebuild their houses,” she said.

The United Nations launched on Nov. 12 an action plan seeking $301 million (P13 billion) from international funders to support six months of relief and recovery operations in Eastern Visayas, including the provision of emergency food, shelter and water, the restoration of education and health systems, and livelihood.

Of this amount, some 39 percent, or $134 million (P5.8 billion), has already been funded, according to the United Nations.

This accounts for multilateral donations out of the total $343.62 million (P14.98 billion) in assistance the Philippine government has so far received from foreign countries and organizations as of Saturday.

The rest of the amount includes bilateral assistance and donations directly sent to relief organizations here.

The United Nations will undertake a “major review” of the appeal in early December, and Amos said the renewed appeal was expected to rise even further, as “there are still communities yet to be reached.”

“The Korean people, through their embassy in the Philippines, reiterate their sympathy for the victims of the storm as well as the survivors, and hope that this assistance will contribute to the quick restoration of their communities and resumption of their lives,” the Korean Embassy said in a statement.

The Israeli Defense Forces (IDF), which has been operating a field hospital for typhoon victims in northern Cebu, is also expanding its operations through helping reconstruction work in Bogo City.

The Israeli Embassy in Manila said the IDF is helping rebuild “critical buildings, including schools in Bogo City as well as a water system in a nearby island.”

The Japanese government approved the latest assistance under its rice reserve program with the Association of Southeast Asian Nations (Asean) started in 2004 “to ensure food security in an emergency caused by temporary and large-scale calamities.”

Japan has provided $30 million (P1.3 billion) in grant aid for the Philippines and has also sent medical teams, supplies and equipment and the Japanese Self-Defense Forces in its largest humanitarian response operation overseas.

Germany has installed a water purification system on Bantayan Island, Cebu, to provide safe drinking water to some 30,000 people in the typhoon-hit area.

Read Next
A foreign officer’s secret ace
EDITORS' PICK
Filipinos to experience TECNO Mobile’s bolder Spark 6
The Grand Midori Ortigas: Zen oasis in the city
Smart widens gap vs competition on 4G availability, wins Opensignal’s first 4G Coverage Experience award
Gov’t eyes use of P73.2 billion in loans to buy COVID-19 vaccines for 60 million people
DOH chief warns of possible uptick in COVID-19 cases after holidays
Solon bats for extension of current school year to July 2021
MOST READ
Former ABS-CBN ‘Sky Patrol’ Ricky Velasco passes away
I can’t probe House members getting kickbacks; I have no jurisdiction – Duterte
Lawyer slain by gunmen on his way to his law firm in Cebu City
US donates $18M worth of weapons system to PH to fight terrorism
Don't miss out on the latest news and information.