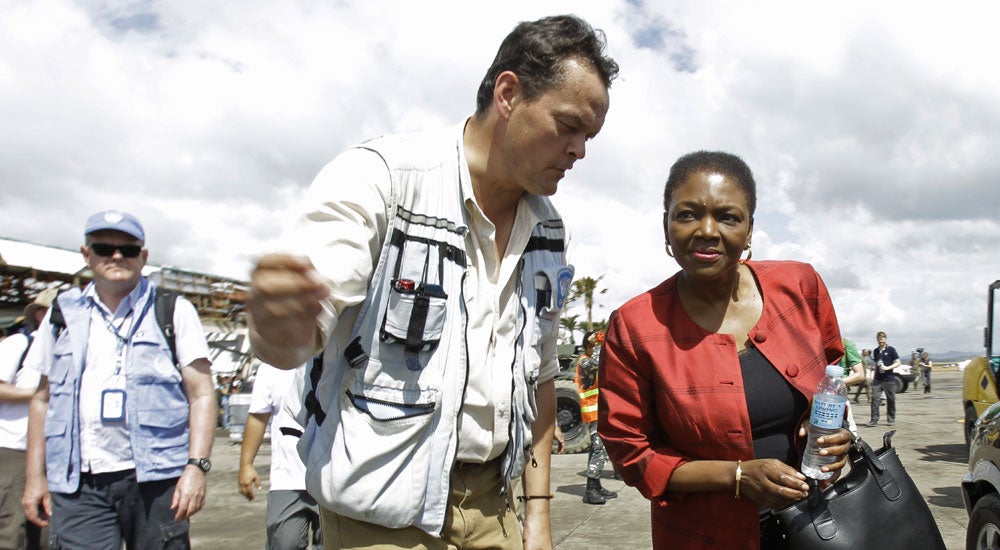 United Nations Humanitarian Chief Valerie Amos, right, is briefed as she arrives at the airport for a tour of Tacloban City on Nov. 19, 2013. “I am very concerned that some 1.5 million children are at risk of acute malnutrition and close to 800,000 pregnant and nursing mothers need nutritional help,” Amos told a news conference at UN headquarters in New York after her trip to the Philippines. AP

UNITED NATIONS—The United Nations warned Friday that 1.5 million children in typhoon-ravaged areas of the Philippines are at risk of malnutrition and called for greater efforts to provide them with food and water.

A UN appeal to cope with Supertyphoon “Yolanda” (Haiyan) has been increased from $301 to $348 million as the extent of the storm disaster becomes clearer.

UN humanitarian chief Valerie Amos said the death toll, increased Friday to over 5,200, would rise higher even as the spotlight turns away from the Nov. 8 supertyphoon.

“I am very concerned that some 1.5 million children are at risk of acute malnutrition and close to 800,000 pregnant and nursing mothers need nutritional help,” Amos told a news conference at UN headquarters in New York after a trip to the Philippines.

A huge international relief operation was launched after the storm, but Amos said: “Much more needs to be done. Food, clean water and shelter remain the top priorities.”

A legislator, meanwhile, had filed a bill giving more protection and resources to vulnerable children.

Taguig Rep. Lino Cayetano said the state must take up the task of ensuring the health and well-being of orphaned, abandoned, neglected or voluntarily committed children, including setting up a P100-million fund for their hospitalization needs, in the absence of their families.

Cayetano’s bill, which was filed in July, seeks to provide health, medical, dental and insurance benefits to vulnerable children through state-supported mechanisms.

The bill did not estimate the number of children without families to care for them. But there are expected to be more orphaned children in the country following the recent disaster in the Visayas.—AFP, Leila B. Salaverria