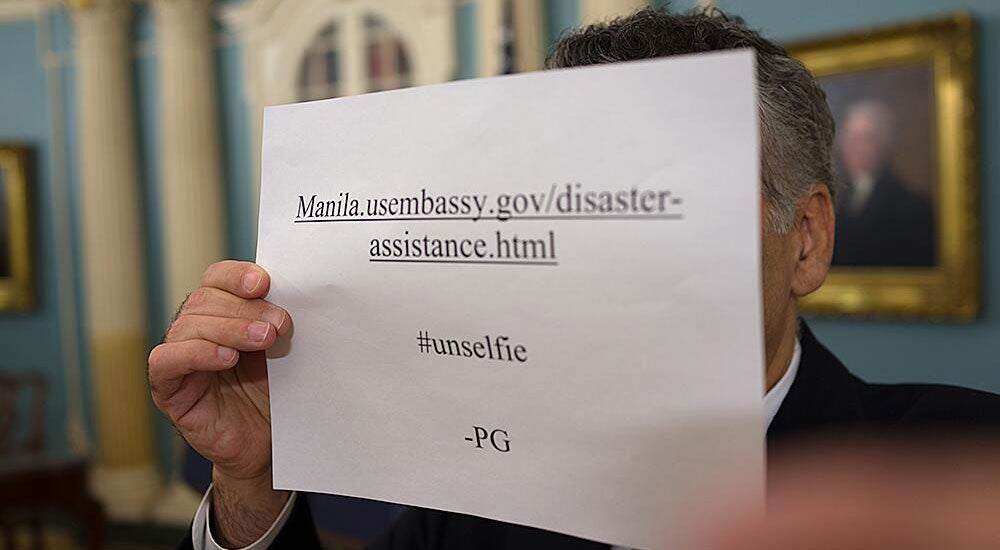 New US ambassador to the Philippines Philip Goldberg poses for an ‘unselfie’ to call attention to the relief operations in the typhoon-devastated Eastern Visayas. US EMBASSY PHOTO

MANILA, Philippines—One of the first official acts of the new United States ambassador to the Philippines was to pose for an “unselfie.”

Ambassador Philip Goldberg took the opposite of a selfie—a self-portrait that is posted online—when he was sworn in as the new envoy to the Philippines on Thursday, to call attention to the relief operations  in the devastated Eastern Visayas.

Goldberg, who replaced Harry Thomas Jr. as Washington’s top diplomat here, was photographed holding over his face a piece of paper on which was written the link (manila.usembassy.gov/disaster-assistance.html) to the US Embassy Manila page detailing US support for typhoon relief and recovery operations here.

The printout also carried the hashtag “#unselfie,” signed off with the envoy’s initials “PG.”

On Friday, Goldberg posted on his Twitter account (@AMBGoldberg) a photo of his photo-less selfie taken at the Treaty Room of the US State Department in Washington during his swearing-in ceremony on Nov. 21.

The US Embassy in Manila (@usembassymanila) then retweeted his post and said: “One of the 1st thing(s) done by Philip Goldberg as Ambassador Designate.”

The US, the Philippines’ colonial overlord for almost half a century and one of its closest allies today, was one of the first countries to respond to the disaster in Leyte and Samar, allocating some $37 million in total assistance so far and helping enormously in speeding up the distribution of relief goods and supplies through its air and sea fleet.

In his remarks after being sworn in by US Secretary of State John Kerry, Goldberg said the start of his new assignment was a somewhat bittersweet experience.

“I head to Manila with mixed emotions. I’m excited and honored to be going to the Philippines, a country with which we share so much history,” Goldberg said. His speech was posted on the US State Department website.

“At the same time, it’s hard to think of the suffering of so many people in the Philippines in recent weeks and all they’ve endured without a touch of sadness and without being moved,” he said.

Kerry said the new envoy “accelerated his departure” after the US Senate moved up his confirmation because of the humanitarian emergency in the Philippines. He is expected to leave for Manila on Monday.

Kerry said Goldberg “can’t get there soon enough in order to help make a difference.”

Brian Goldbeck, the US chargé d’affaires, has been leading the US Embassy team in coordinating the US relief effort in the absence of an ambassador. 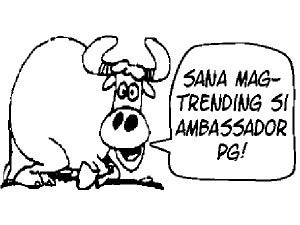 Upon arrival in Manila, Goldberg will begin his duties after presenting his credentials to President Aquino.

“… [W]e want to have our ambassador on the ground in the Philippines to deal with the challenges of emergency assistance to the Philippines,” Kerry said during Goldberg’s swearing-in.

“As we struggle to respond to this human disaster, we’re proud that we’re sending to the Philippines the right person for the job. Phil Goldberg is a consummate professional who has held an enormous array of positions in the foreign service,” he said.

Prior to his posting here, Goldberg was Assistant Secretary at the State Department’s Bureau of Intelligence and Research (INR). He has served in US missions in Eastern Europe, Africa and Latin America. He was last posted as envoy to Bolivia from 2006 to 2008.

The US Senate last week confirmed Goldberg’s appointment that had been announced by US President Barack Obama more than three months earlier, just as the US aid agency and defense department mounted its extensive assistance to typhoon relief operations in the Philippines.

Goldberg reiterated the US commitment to providing the Philippines with sustained aid as his new host country faced the prospect of a lengthy period of recovery and rehabilitation in the affected regions, citing the strength of Filipinos even in the toughest of circumstances.

He cited how the “outstanding” coordination between the Philippine and US governments and militaries “has saved lives.”

Proud to be of help

Kerry spoke of his pride in America’s leading role in the relief effort as he recounted his firsthand encounter with the “indomitable spirit” of the Filipinos in 1986, in the months leading up to the first Edsa People Power Revolution and the restoration of democracy following years of martial rule.

“… I spent many long hours and days in the Philippines—I was there—there for the elections (the 1986 snap elections), and I’ve always marveled that the extraordinary indomitable spirit of the people of the Philippines who are so committed to their democracy, standing for hours that day in the sun, waiting for the privilege of voting,” said Kerry.

“Now they are waiting for emergency assistance. Now they are once again displaying that incredible spirit, but literally to survive. One woman I know held up a sign saying “Help me, I’m hungry,” or “We are hungry,” Kerry said.

“I’m proud that the United States of America is helping. We have heard these calls, we are responding to these calls. But we still need to do more,” he said.

New US envoy to Philippines sworn in