Temporary Protected Status for Filipinos in US picks up bipartisan backing 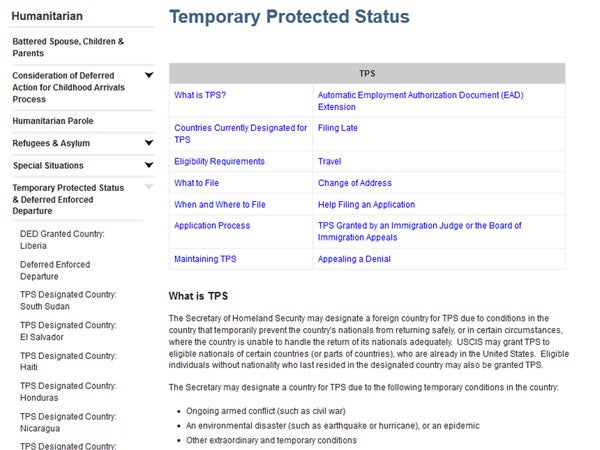 Currently allowed under immigration laws for countries impacted by a natural disaster resulting in a “substantial, but temporary, disruption of living conditions,” TPS will provide temporary immigration relief to undocumented Filipino immigrants currently residing in the US.

In a letter to DHS Acting Secretary Rand Beers, NaFFAA national chair Eduardo Navarra wrote that “this benefit will alleviate their fears of deportation to a devastated country and allow them to work and stay in the US temporarily. With this authorization, Filipino nationals can continue providing material and financial support to the homeland, especially at a time when they are in dire need of help.”

J.T. Mallonga, NaFFAA national vice chair and president of the Filipino American Legal and Defense Fund (FALDEF), explains that there are precedents where the US administration acted on similar requests.

“Following the devastating earthquake that struck Haiti two years ago, the US designated TPS to Haitian nationals, allowing them to continue living and working in the country for 18 months,” Mallonga said. “The same should be done to Filipinos, and it must be done soon.”

Other nationals from countries devastated by natural disasters, such as Honduras, Sudan and El Salvador, have also been granted TPS before.

Mallonga further explains that “while TPS provides temporary legal status for Filipinos already in the US, it will not necessarily lead to permanent residency. Also, TPS does not provide humanitarian aid or legal status for people not already here.

TPS may only be granted for 18 months. Beneficiaries will be granted a temporary employment authorization document as proof of authorized stay in the US for that period.  Qualified TPS applicants will then be allowed to remain in the US with a work permit. This is only meant to be a temporary immigration benefit.”

When the Obama administration announced the designation of TPS for Haitian nationals in 2011, Mallonga notes that the 100,000-200,000 Haitian immigrants estimated by the Department of Homeland Security to be in the US without authorization were not subject to deportation. The estimated 270,000 undocumented Filipino immigrants will similarly be given the same benefit if TPS is granted.

With members of Congress weighing in on the issue, Navarra has conveyed his thanks to a bipartisan group of US Senators and US Representatives who have endorsed the call for TPS.

“Although congressional approval is not required, their strong message of support is very encouraging,” Navarra said. “We hope more members of Congress will do the same.”

In a Nov. 19 letter signed by 20 US Senators, the signatories assert that “providing TPS is critical to humanitarian relief efforts as it both protects individuals who would be endangered by returning to their country of origin and it allows the home country more time to recover before accepting returnees.”

“We also appreciate what the Obama administration has done to direct much-needed food and relief aid to the affected areas,” Navarra adds. “USAID and the Dept. of Defense have deployed manpower and resources in a timely manner, in addition to providing millions of dollars in emergency assistance.

In the days after Supertyphoon “Yolanda” (international name: “Haiyan”) hit Central Philippines, NaFFAA has been working closely with the American Immigration Lawyers Association (AILA), the Asian American Justice Center (AAJC) and other national advocacy groups to map out a plan of action regarding TPS. In addition to letters to Congress, messages were also sent to the Philippine Embassy and other consulates across the US.

In a letter to Philippine Ambassador Jose L. Cuisa, Jr., Navarra formally called on the Philippine government, “as a matter of courtesy, to formally request the Obama administration to give the matter its utmost consideration.”

Navarra emphasized the humanitarian aspect of TPS, “which allows Filipino breadwinners in the US to be able to go home to the Philippines for closure (in case of death in the family) and to get them to rebuild their lives.  It is for this humanitarian reason that there is an outpouring of overwhelming support from across the country for the designation of TPS status for the Philippines.”

In pressing for a favorable response from the Aquino administration, Navarra points out that TPS provides important remittance benefits that will help the Philippine economy. Remittances back to El Salvador, which made up over half of all export earnings, have been critical to economic development, and exceeded US foreign aid.

Moreover, Navarra says, “TPS will aid the estimated 270,000 undocumented Filipinos in the US, and another 300,000 on temporary visas. This is a very large pool of potentially eligible Filipinos who would be able to stay in the US, obtain work permits, and send remittances to the Philippines.

“But to make this happen, there must be public pressure from the community because it’s ultimately up to the President to make this designation,” Navarra explains. “I am calling on all Filipino-Americans to call or write their US Senators and US Representatives, urging them to pressure the Department of Homeland Security, to act expeditiously on this matter.”