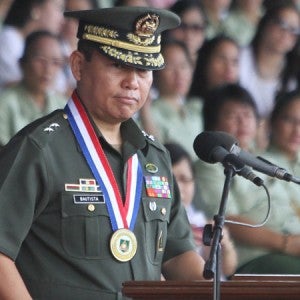 MANILA, Philippines—Since foreign aid had been pouring in after the onslaught of supertyphoon Yolanda, the Armed Forces of the Philippines (AFP) on Thursday has decided to institutionalize the military assistance given by 16 countries, particularly the United States, to the Philippines in the form of the Multinational Coordinating Center (MNCC).

AFP Chief of Staff Lieutenant General Emmanuel Bautista, in a press briefing at the Office of Civil Defense headquarters in Camp Aguinaldo, officially announced the creation of the MNCC “to coordinate and synchronize military to military operations and facilitate the cooperation between the AFP and the US Joint Task Force in support of the National Disaster Risk Reduction and Management Council (NDRRMC) and the US Agency for International Development (USAID).”

As foreign contingents of 61 air assets, 14 naval vessels and seven C-130s fly and dock to the country for relief missions, Bautista said the newly-established council was tasked to ensure that the movements of foreign aid were monitored “perfectly to the general situation of the disaster relief efforts of the national government.”

Representing the members of US Marine Corps, Lieutenant General John Wissler said the American forces will continue to provide their relief efforts and augmentation forces for as long as these are needed, noting that the US forces are “simply here to support.”

“This tragedy would have brought every nation to its knees but one thing that comes to me is the resilience of the people of the Philippines. From the government to the AFP to the private sector to the people who have been affected, your coming together has made this partnership (Philippines-US) easy,” he said.

Wissler, contrary to his fellow American and CNN reporter Anderson Cooper, lauded the “hardwork” of the government and the AFP for their “very rapid response.”

He said the AFP-led coordination center has been “central” to the effective application of all the resources that different nations have contributed.

But when asked if USAID dart leader Al Dwyer has a comment on Cooper’s report, he told the media he cannot comment on the broadcast journalist’s report since he was not able to see it.

Dwyer pointed that the criticisms against the government’s response may have been caused by its non-simultaneous efforts.

“In the early days (of the aftermath), the focus was to get as many people as many as possible. The perception of lack of organization was not building the infrastructure first and then responding (to the survivors’ needs) rather than responding simultaneously,” the USAID official said.