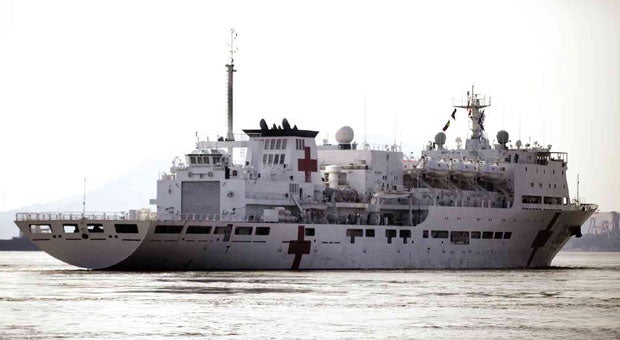 A FIRST FOR SINO SHIP Peace Ark, a Chinese Navy hospital ship, leaves a base in Zhoushan, east of Shanghai, for a relief mission to the typhoon-devastated Philippines. It is considered the first Chinese Navy ship to enter Philippine waters with Manila’s “consent” since the maritime dispute in the West Philippine Sea between the two countries ensued. AP/EUGENE HOSHIKO

Friends in good times and bad.

This was how the Australian defense attaché summed up Thursday the Multinational Coordinating Council (MNCC) of the Philippine government and the armed forces of 16 countries working together for faster and more efficient distribution of relief to the survivors of Supertyphoon “Yolanda” in the Eastern Visayas.

“Our shared histories with the Philippines go a long way back. Friendship is not just about the good times. Friendship is also about the bad times, too,” Lt. Col. Paul Barta told the Inquirer.

“Our friendship has been long term. Our commitment remains long term and our thoughts and prayers continue to be with the people of the Philippines. After a formal request from the government of the Philippines, the United States arrived and ready to help along with other nations,” said Tina Malone, spokesperson for the US Embassy.

“Our role was to amplify the government of the Philippines’ response by providing extra help in a time of need in the spirit of damayan,” Malone added.

China, which has one of the world’s biggest and most capable militaries, has already sent aid to the typhoon survivors but is not yet on the MNCC list.

‘Starting point’
The Philippines and China have been embroiled in a territorial dispute in the West Philippine Sea (South China Sea) for decades, with tensions rising in January after Manila took their dispute to the United Nations for arbitration.

Asked at a news conference about China’s absence from the council, Defense Undersecretary Pio Lorenzo Batino said the 16 countries were a “starting point.”

“We expect that there are foreign militaries that want to take advantage of the MNCC. We will welcome all the support that we will be getting, specifically for the MNCC, all the military support,” Batino said.

The council was organized on Nov. 16 “to coordinate and synchronize military-to-military operations between member countries along with the Armed Forces of the Philippines (AFP),” Batino said.

It is the first time for the AFP to work with foreign militaries on the same council to “accelerate humanitarian and disaster relief operations and to fully maximize” each country’s efforts, he said.

The Israeli government has called its help mission, “Operation: Islands of Hope.”

The Israeli Defense Force has a composite team of medical personnel, engineers and search-and-rescue personnel, according to Israeli Ambassador to the Philippines Menashe Bar-On.

Israel has also dispatched an advanced mobile hospital with 100 tons of humanitarian and medical supplies, which will be based in Bago, Cebu province, to attend to the medical needs of typhoon survivors.

The Australian government has also sent a hospital ship, which has already served hundreds of survivors, some of whom sustained severe injuries that needed surgeries, Barta said.

AFP Chief of Staff Gen. Emmanuel Bautista said the foreign contingents had a total of 61 airplanes and 14 naval vessels, aside from hundreds of rescue and medical personnel responding “swiftly and regularly to areas of critical and immediate needs for resource and relief.”

The HMAS Daring of the United Kingdom is anchored northeast of Panay Island servicing the relief operations in Capiz province.

Seven C-130s from the United States, Australia and Japan and several foreign helicopters have been flying relief missions with others standing by “for immediate deployment if necessary,” Bautista added.

US Lt. Gen. John Wissler, head of the US military contingent, said that after Yolanda struck Eastern Visayas, “the situation on the ground was chaotic but would be chaotic in any part of the world because of the tremendous devastation.”

He said coordination with the Philippine government allowed the foreign countries wanting to help to hit the ground running when they arrived in the typhoon-hit areas.

“It was not a happy scene by any stretch, but the force that came on the ground was ready to be employed quickly,” Wissler said.

Asked how the MNCC handles the notoriously slow bureaucratic system in the Philippines, Batino said: “We have to process the military support. We have our rules to follow. We have to issue clearances and government agency permits.”

“These are the things that we want to coordinate to accelerate the [delivery] of government support,” Batino said.