John Kerry to come to PH in December—Legarda 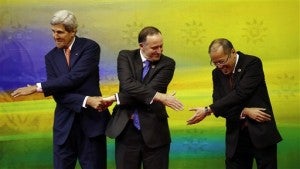 MANILA, Philippines – US Secretary of State John Kerry will push through with his trip to the Philippines in December, Senator Loren Legarda said on Wednesday, quoting the Department of Foreign Affairs (DFA).

“Allow me to also give you information to your honor that Secretary Kerry is indeed coming in two weeks’ time, by December. Hopefully, there will be no storms ,” said Legarda, who defended the proposed budget of the DFA on the  floor.

Kerry was supposed to come to the Philippines in October to take the place of US President Barack Obama, who was originally scheduled to visit the Philippines but cancelled at the last minute due to a US government shutdown.

But because of the recent bad weather in the Philippines, Kerry had to also cancel his trip.

“Hopefully when Secretary Kerry comes, he will not be welcomed by a typhoon…” Legarda said.

But Senate Minority Leader Juan Ponce-Enrile, who raised the issue, said in jest that if the country would not be hit by a typhoon, it would be hit by an earthquake.

“We are prone to all kinds of calamities,” Enrile pointed out.

Despite the cancellation of the trips by Obama and Kerry, Legarda said the relationship between the US and the Philippines remained “friendly, if not robust.”

Kerry: ‘Your spirit is strong’