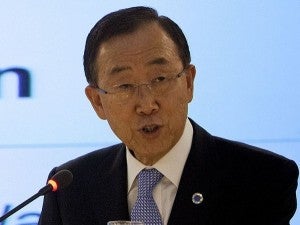 With just over three days left in the marathon UN talks in Warsaw, delegates and observers complained of scant progress, particularly on the vexed question of money, after more than a week of haggling.

The annual talks seek a way towards sealing a global pact at the end of 2015 for curbing greenhouse-gas emissions and channelling aid to poor, climate-vulnerable countries.

“I am deeply concerned that the scale of our action is still insufficient to limit the global temperature rise to below two degrees Celsius [3.6 Fahrenheit] from pre-industrial levels,” Ban told the opening of a high-level segment capping this year’s round of negotiations.

“Current pledges are simply inadequate,” he said. “We must set the bar higher.”

And he urged negotiators to “step up finance”.

Developing countries are challenging rich nations to honor a 2009 promise to muster up to $100 billion (74 billion euros) a year in climate aid by 2020.

Ministers are to discuss financing issues on Wednesday.

Philippines negotiator Yeb Sano, into the ninth day of a water-and-tea-only fast in solidarity with his typhoon-stricken nation, also pleaded for help.

“This is a call to once and for all take ambitious steps to address climate change, which is now affecting lives and livelihoods,” he said on the sidelines of the talks, pledging to continue his protest until “meaningful outcomes” are achieved.

The UN Environment Programme meanwhile said Africa alone will need at least $200 billion a year by 2070 to shore up its climate defences.

“The finance issue is creating a lot of anger here,” Alden Meyer of US environmental group Union of Concerned Scientists told AFP.

“Hopefully the ministers can come in now and start working on some of the political elements . . . and finally come up with compromises and defuse some of the tensions.”

Still struggling with an economic crisis, wealthy economies are hesitant to put figures on the table for the 2020 target or for shorter-term funding.

They are also leery about a proposed “loss and damage” mechanism they fear could make them liable for limitless compensation for climate change.

“Developing countries need to feel confident that the commitment to that 100 billion is still on the table despite current financial circumstances,” UN climate chief Christiana Figueres said on Monday.

“There needs to be more clarity on how that funding is going to be mobilized.”

Figueres pleaded with countries to draft a roadmap to the 2015 conference in Paris.

But observers said there was no agreement even on a deadline for countries to make their emissions pledges—with some wanting to postpone until beyond 2015.

EU climate commissioner Connie Hedegaard insisted Tuesday that national pledges must be enshrined in the 2015 pact.

“We cannot have an empty deal, a nice architecture, nice elements but without real content, real commitments,” she said.

Even the form of the deal has proven a tough nut to crack.

Some countries such as the United States want to set their own targets, to be revised after broad scrutiny, while others want more than mere peer pressure to make sure the commitments are adequate.

Deep disagreement also remains on whether rich nations with a long history of emissions should bear a bigger emissions-curbing burden.

But this has met with resistance from rich countries which argue that future climate peril will come mainly from the massive carbon emissions of developing giants.

“The notion of responsibility has got to be based on historic emissions, absolutely, current emissions, and the future emissions that you are locking into the system by the energy infrastructure that you are building,” US negotiator Todd Stern said on Monday.

Ban told heads of state and government attending a climate summit he will host in New York next September to “bring bold and new announcements and action.

“We need your political leadership at this crucially important time,” he said.