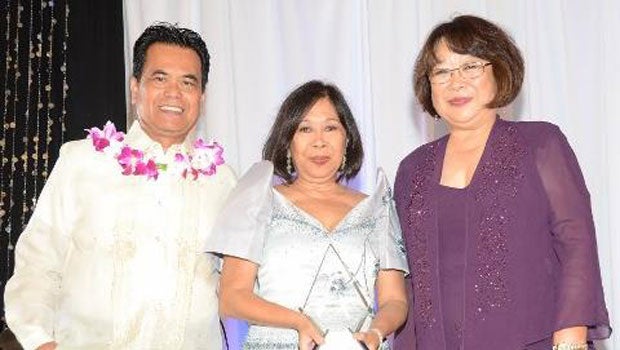 Edmund Aczon, chair of the board of directors, and Rose Churma, president & COO of the FilCom Center, presented the Community Service Award to Emme Tomimbang at the fund-raising event. PHOTO BY GABE DE LISO

HONOLULU—“Emme’s special touch in bringing out the best in people is a gift,” gushed Rose Churma, president and COO of the Filipino Community Center in Waipahu, during the sold-out “Sharing Memorable Moments with Emme Tomimbang & Friends” on Nov. 9.

Some 600 people attended the 11th annual Gala Dinner and Silent Auction benefit for the Filipino Community Center (FilCom Center).  Proceeds from the fund-raising event will go to community programs for the elderly and youth not only in the Filipino community, but also the community at large.

The gala raised more than $150,000, said Churma, who thanked veteran journalist Emme Tomimbang. The latter was honored for her many “decades of community service and ability to elevate the visibility of the FilCom Center in Waipahu,” said Edmund Aczon, chairman of the FilCom Center board of directors.

“Emme’s stature in the community was able to attract an eclectic group of individuals from celebrities, entertainers, elected, corporate and religious leaders to justices of Hawaii court,” Aczon added.

“It was a magical night seeing all my friends in the audience,” said Tomimbang. “After all, my husband, Jim Burns, and I have been through to survive personal medical challenges, we felt the evening was truly a celebration of life. It’s such an honor and a privilege to support the FilCom Center and bring people who wouldn’t otherwise have ventured to this historic plantation town of Waipahu in order to see this beautiful center inspired by colonial Spanish design.”

Soetoro-Ng read a personal note her brother had sent. The president quipped that he used to watch Emme on television when he was a student at Punahou School. He joined others in congratulating both Tomimbang and Burns for their big night at FilCom Center.

Fund-raising efforts are continuous in the FilCom Center. Tomimbang and the board will be gearing up for yet another fund-raising event, this time for the Filipino victims of Supertyphoon “Yolanda” (international name: “Haiyan”). The center will be accepting checks and partnering with Consuelo Foundation, a nongovernmental organization with offices located at Honolulu and the Philippines. The center is also involved with “Aloha Philippines,” which will receive donation for the typhoon victims through financial institutions—Bank of Hawaii, First Hawaiian Bank, American Savings Bank and Central Pacific Bank.

Read Next
Jazz concert to benefit ‘Yolanda’ survivors
EDITORS' PICK
Is it safe to talk politics again at family gatherings? ‘The Reconciliation Dinner’ shows us what that’s like
Pagasa: Warm, sunny Sunday in most parts of PH
The Best Tech Gifts For The 2022 Holidays
EDITORIAL: To a bike-friendly future
vivo’s coming to town to grant wishes with more holiday promos
House energy committee chair Arroyo bats for cheap electricity
MOST READ
LOOK: Vhong Navarro transferred to BJMP detention facility in Taguig
The Elephant Man in the Senate
Posh village as ‘shabu’ haven
LOOK: Zanjoe Marudo bonds with Ria Atayde, her family
Don't miss out on the latest news and information.