Selfie tops twerk as Oxford’s word of the year 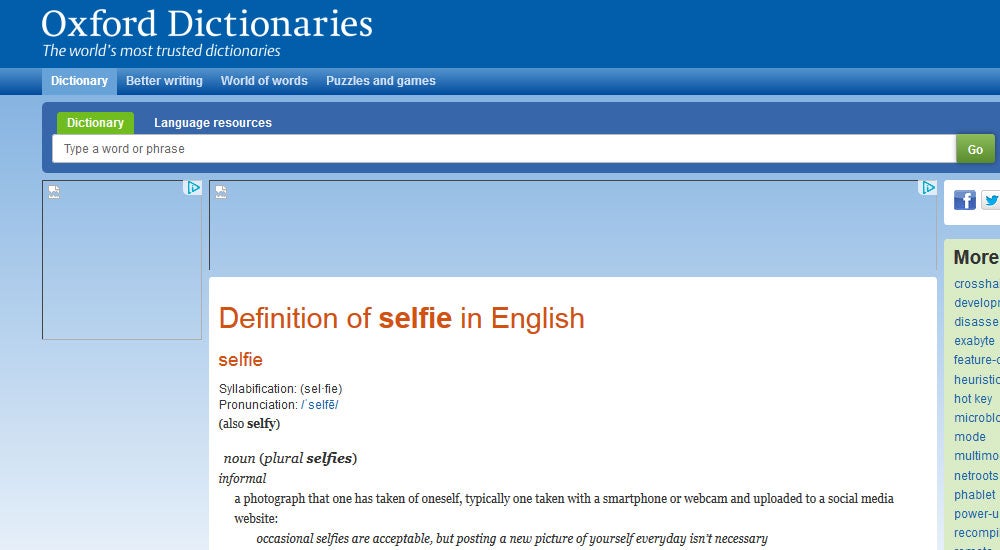 LONDON—Selfie is the 2013 word of the year, Oxford Dictionaries announced Tuesday, edging out some stiff competition from twerk.

Usage of the word has increased 17,000 percent over the past 12 months, said Oxford Dictionaries, which publishes the mammoth Oxford English Dictionary (OED), styled as the definitive record of the English language.

Selfie is defined as “a photograph that one has taken of oneself, typically one taken with a smartphone or webcam and uploaded to a social media website”.

In 2013 it evolved from a social media buzzword to mainstream shorthand for a self-portrait photo.

Judy Pearsall, editorial director for Oxford Dictionaries, said their language research program collects around 150 million words of current English in use each month.

“We can see a phenomenal upward trend in the use of selfie in 2013, and this helped to cement its selection as word of the year,” she said.

The research found that the frequency of the word selfie in the English language increased by 17,000 percent since this time last year.

The earliest known usage of the word was traced to an Australian online forum post in September 2002.

The ABC Online posting said: “Um, drunk at a mates 21st, I tripped ofer [sic] and landed lip first [with front teeth coming a very close second] on a set of steps. I had a hole about 1cm long right through my bottom lip. And sorry about the focus, it was a selfie.”

Pearsall said: “Social media sites helped to popularize the term, with the hashtag selfie appearing on the photo-sharing website Flickr as early as 2004, but usage wasn’t widespread until around 2012, when selfie was being used commonly in mainstream media sources.

“The use of the diminutive -ie suffix is notable, as it helps to turn an essentially narcissistic enterprise into something rather more endearing.”

She added: “Australian English has something of a penchant for -ie words—barbie for barbecue, firie for firefighter, tinnie for a can of beer—so this helps to support the evidence for selfie having originated in Australia.”

Selfie is not in the OED but the multi-volume dictionary is currently considering the term for inclusion.

The other words on the shortlist for word of the year were bedroom tax (opponents’ term for a British welfare policy change); binge-watch (watching multiple television episodes in succession); bitcoin (a digital currency); olinguito (South American mammal), schmeat (synthetic meat), showrooming (looking at items in shops then buying online) and twerk.

The verb to twerk was described as to “dance to popular music in a sexually provocative manner involving thrusting hip movements and a low, squatting stance”.

Twerking rocketed to fame when US performer Miley Cyrus did the dance at the MTV video music awards in August.

“Twerk seems to have arisen in the early 1990s, in the context of the bounce music scene in New Orleans,” Oxford Dictionaries said.

“The most likely theory about the origin of this word is that it is an alteration of work.

“Its association with Miley Cyrus this summer created a huge spike of usage in the media.”